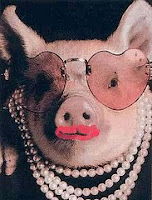 I suspect that few are surprised at the results of the "Troopergate" investigation which found that Sarah Palin had abused her power in her relentless efforts to get her former brother-in-law fired from his job. In my view, it is typical of the downright meanness often exhibited by the self-anointed Christianists who rarely act in a Christian manner even though they talk about the "faith" until listeners are ready to vomit. It's all about show and self-congratulation - it has nothing to do with actually living the Christian message. If elected to the Vice Presidency, I suspect that Palin might actually make Emperor Cheney look even handed. She is unfit for high office. Here are some highlights from the New York Times:
*
Gov. Sarah Palin abused the powers of her office by pressuring subordinates to try to get her former brother-in-law, a state trooper, fired, an investigation by the Alaska Legislature has concluded.
*
A 263-page report released Friday by lawmakers in Alaska found that Ms. Palin, the Republican vice-presidential nominee, had herself exerted pressure to get Trooper Michael Wooten dismissed, as well as allowed her husband and subordinates to press for his firing, largely as a result of his temperament and past disciplinary problems.
*
“Such impermissible and repeated contacts,” the report states, “create conflicts of interests for subordinate employees who must choose to either please a superior or run the risk of facing that superior’s displeasure and the possible consequences of that displeasure.” The report concludes that the action was a violation of the Alaska Executive Branch Ethics Act.
*
In the report, the independent investigator, Stephen E. Branchflower, a former prosecutor in Anchorage, said that Ms. Palin wrongfully allowed her husband, Todd, to use state resources as part of the effort to have Trooper Wooten dismissed. The report says she knowingly “permitted Todd Palin to use the governor’s office and the resources of the governor’s office, including access to state employees, to continue to contact subordinate state employees in an effort to find some way to get Trooper Wooten fired.”
Posted by Michael-in-Norfolk at Monday, October 13, 2008

Y'know... I've come to the conclusion that Christian Conservatives must *prefer* their candidates to be dishonest and corrupt. How else can you explain Bush, Cheney, Rumsfeld, Ashcroft, Gonzalez, Reagan, Nixon, etc?

I like how the Far Right is trying to paint Obama as being friends with a terrorist. Obama was EIGHT YEARS OLD when he was friends with the terrorist in question. ::sigh::