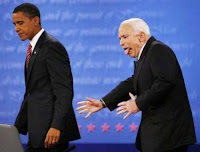 John McCain lied frequently during last night's debate, but one lie in particular ought to have sent the alarm bells ringing among women, LGBT citizens and anyone else who believes in personal privacy. This lie dealt with who McCain would nominate to the U. S. Supreme Court if president. While he stated that he would have no litmus test for nominees, he has repeatedly promised to nominate individuals like Scalia and Thomas who do NOT believe that the Constitution grants the right to privacy to individual citizens. It is this right which was first enunciated in Griswold v. Connecticut which struck down a law that barred MARRIED COUPLES from using birth control that began the line of cases that includes Roe v. Wade and Lawrence v. Texas that have granted protections to women and struck down the laws that continued to make LGBT citizens potential felons in 13 states, one of which was Virginia.
*
McCain can call such anti-privacy nominees whatever he wants - "strict constructionist" is a favored code term with Christianists - but the bottom line is that with two more such "strict constructionists" on the Court, contraception, abortion under any circumstances, and a permanent end to the sodomy laws all are put at risk. Read Scalia's opinions and dissents - it is all there. If you don't believe me, also read the websites of Christianist groups like Focus on the Family, Family Research Council, etc., and you will see that this organizations want the line of privacy decisions reversed and "strict constructionists" is the code term/litmus test that would be used to select justices that would over turn such prior Supreme Court decisions.
*
In short, McCain lied big time last night. He's become as much a pathological liar as Bible Spice Palin who, if her lips are moving, is likely lying.
Posted by Michael-in-Norfolk at Thursday, October 16, 2008