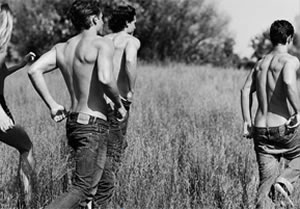 This situation (http://hamptonroads.com/2008/02/virginia-beach-police-seize-photos-abercrombie-store#comment-587076) epitomizes why I no longer live in Virginia Beach and would never ever move back. Talk about making the city a laughing stock world wide via the Internet! Despite the largest population of any city in Virginia (due to the merger of Princess Anne County and the town of Virginia Beach) and its pretensions of being a modern, progressive city, Virginia Beach remains a Barney Fife type of place with a plastic, artificial downtown and a resort strip that only those who have never been to a first class resort would come to visit. Seizing these obviously NOT obscene posters merely shows the cretin mindset that is far too pervasive in the city government and police force known for its corruption and insider dealings.
With all the issues the police could be better pursuing – I had a car stolen twice in Virginia Beach, once from the parking lot of the main library (the Mayor’s comment was that I should get a car with a better alarm system) – they waste their time on this idiocy. Moreover, if this advertisement is “obscene,” are the police going to arrest every fat tourist wearing an inappropriate bathing suit? Believe me, you can see some pretty nasty sights with a lot more skin showing walking along the boardwalk. How about arresting the mayor – she might be considered obscene by some since she is overweight. Here are some story highlights:
Police, saying they were responding to citizen complaints, carted away two large promotional photographs from the Abercrombie & Fitch store in Lynnhaven Mall on Saturday and cited the manager on obscenity charges. Adam Bernstein, a police spokesman, said the seizure and the issuance of the summons came only after store management had not heeded warnings to remove the images.
The citation was issued under City Code Section 22.31, Bernstein said, which makes it a crime to display "obscene materials in a business that is open to juveniles." He did not say what was being done with the pictures and when the manager, whose name was not released, is scheduled to appear in court.
Bernstein said the summons for a Class One misdemeanor was issued to the manager because there is no legal way to issue a summons to a corporate entity in such circumstances. The manager was not arrested but faces a fine of up to $2,000 and as much as a year in jail, if convicted. Bernstein said that in a meeting last week with store management, the officer - who is assigned to routine patrol of the mall - said he understood it was a corporate decision as to what would be displayed in the stores. But he explained that that didn't exempt the local store from complying with the city code. Bernstein said management was told specifically: "We want those advertising signs taken down."
Posted by Michael-in-Norfolk at Monday, February 04, 2008

I was waiting for your comment on this topic. Agreed, it is absurd. Not sure if that merits a personal attack on the mayor or not, but I can understand your emotions considering all things. I do agree the images are not obscene in the least -- a bit racy, definitely, but not obscene. The question is, "Who determines what is and isn't obscene?" And, how do you get your voice heard? Is there a petition to say these posters are artistic (and sexy), but honestly how does the city allow lingerie, panty and bra ads to be printed in the daily newspaper? And, don't even get me on the subject of advertisements for personal hygiene products that are just plain rediculous. Really, does everyone have to know the ins and outs of the female anatomy to the point of being able to describe the organs and the various aspects of the periodic cycle? Oh, by the way, don't miss the letter to Dear Abby about the 16-year-old who has been having a relationship with her 48-year-old pastor. Those in charge of the moral compass have damaged their bearings, methinks.

I did not intend a personal attack on the mayor per se. My point was that of who decides what is obscene? As elmer points out, if the Abercrombie posters are obscene what about all the other materials he mentions. My beef with the mayor is that she should have called the police chief and said "what the F*** are you idiots doing??" If she's worried about the city's image, this only makes the city look ridiculous and backward.

I thought following the Janet Jackson SuperBowl Sunday fiasco that eople would be wary to go this route especially after what took place involving some of the people who turned the matter into a cause celebre, but I guess people don't learn.

Hopefully, A&F won't cut and run and go after the freaks.

Thus it would appear that other than the usual politically correct answers people give when reporters ask dumb questions and people give dumb answers, the response has been quite the opposite.