Afghanistan Says it "Appreciates" Efforts to Save Student Journalist 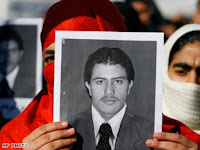 I have previously posted about the student journalist in Afghanistan [pictured at left] who has been sentenced to death for offending the lunatic Islamic fundamentalists who appear to have more power than the Chimperator’s puppet, Hamid Karzai. That Karzai’s government hasn’t overturned this kangaroo court ruling is a travesty and if the Chimperator had any brains (a huge assumption, I know) and guts, he’d be on the phone to puppet man Karzai and make it clear that this sentence needs to go away NOW. Instead, the USA – that supposed beacon of freedom and liberty and advocate for human rights – has done little or nothing to help the young journalist and other foreign powers have moved to pressure for his release. Now, it appears that the situation is even dirtier than first suspected and may involve retaliation for exposing corruption and human rights abuses. The retaliation also has a gay twist to it - I guess the Islamic fundies are like the GOP homophobes who like their boys secretly on the side and get upset when outed. Here are highlights on the story from CNN (http://edition.cnn.com/2008/WORLD/asiapcf/02/02/afghan.journalist/index.html):

(CNN) -- Amid international outrage over a student journalist sentenced to death for blaspheming Islam, the Afghan government Saturday said it was "fully aware of the gravity of the case." Afghanistan "appreciates the concern expressed on his behalf," the government said in a statement released by the Afghan Embassy in Washington. "The office of President [Hamid] Karzai is closely monitoring the case and working with Afghanistan's judicial system to find a just solution in accordance with Afghan law and our nation's international obligations."

Parwez Kambaksh, 23, was sentenced to death after he was tried and convicted in a Mazar-e-Sharif court on January 22 for distributing an article that commented on Quranic verses that deal with women. Part of the article discussed whether a Muslim man should have the right to marry more than one woman, and prosecutors deemed the work offensive to Islam.

The United Nations has also condemned the sentence, and the United States last week expressed concern. The Independent, a British newspaper, has taken on Kambaksh's cause and has started a petition to free the student, said Anne Penketh, the newspaper's diplomatic editor. "Three days ago, we launched our petition, which as of this morning has 38,000 signatures," she said. Penketh lauded Mozafari's statement as a sign that the newspaper has already achieved "a measure of success," but said the newspaper was still calling for Karzai to pardon Kambaksh. "We're pressing our government to put more pressure on President Karzai," she said. "We've been trying to get hold of him -- in fact, if you're watching, President Karzai, do call."

Penketh said the issue is not just about a journalist. "It's about human rights, and particularly women's rights in Afghanistan." Some media groups, including Reporters Without Borders and the Institute for War & Peace Reporting, allege the charges against Kambaksh are in retaliation for his brother's investigative journalism articles, which detail human rights abuses at the hands of political and paramilitary factions in northern Afghanistan. Sayed Yaqub Ibrahimi, Kambaksh's brother and a leading independent journalist in the region, has named government officials who extort money from locals in some articles, said Jean MacKenzie, country director of the Institute for War & Peace Reporting. In another piece, which is among the articles he is best-known for, Ibrahimi describes the "dancing boys," teenage boys who dress up as girls and dance for male patrons at parties thrown by some commanders in northern Afghanistan, MacKenzie said.
Posted by Michael-in-Norfolk at Monday, February 04, 2008