McCain Talks to Falwell's Son ahead of Virginia Primary 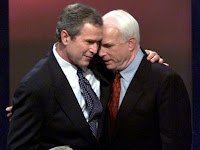 I was less than pleased to see this article in this morning’s Virginian Pilot (http://hosted.ap.org/dynamic/stories/V/VA_CAMPAIGN_VIRGINIA_VAOL-?SITE=VANOV&SECTION=STATE&TEMPLATE=DEFAULT) about John McCain kissing the Ring of Jerry Falwell’s son, Jonathan Falwell. It is precisely this pandering to the Christian Right and those who seek to undermine separation of church and state by today’s GOP that makes it impossible for me – and many in my family – to any longer support the GOP. Unfortunately, no one in the GOP has the guts to tell these theocrats that they need to get a life and read the Constitution and documents written by the founding fathers (e.g., Jefferson’s statute for religious freedom which STILL is the law in Virginia (http://leg1.state.va.us/cgi-bin/legp504.exe?000+cod+57-1)) that condemn the very actions of people like the late Mr. Falwell. Here are some story highlights:

ROANOKE, Va. (AP) -- Conservative Christian leaders in Virginia have been fairly quiet about the state's presidential primaries Tuesday, but the Republican candidates haven't forgotten them. The Rev. Jonathan Falwell, son of the late Rev. Jerry Falwell, said Wednesday that he had talked with John McCain within the past 24 hours. Falwell said he wasn't ready to endorse a candidate, but wanted to hear more from the Arizona senator on the issues. McCain's phone call to him resulted from discussions he's had with the candidate's campaign staff over the past couple of months, Falwell said.

"I look forward to seeing what McCain's plan is to unite the party," Falwell said, "and to see what he has to say in the coming days on the social agenda." Falwell, who succeeded his father as pastor of Lynchburg's Thomas Road Baptist Church, said he wanted to hear McCain's ideas on national security, the economy and "how to protect human life and traditional marriage." He also said he was interested in the Arizona senator's ideas on Supreme Court nominees.
His brother, Jerry Falwell Jr., endorsed Mike Huckabee in November when the former Arkansas governor visited Liberty University. Falwell Jr. is chancellor of the school his father founded.
Posted by Michael-in-Norfolk at Thursday, February 07, 2008