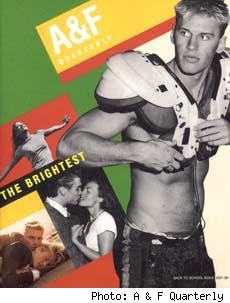 I guess having accomplished their goal of making the city of Virginia Beach a mockery world wide (apparently a number of TV networks, including Fox picked up the story), the powers that be in Virginia Beach are dropping all obscenity charges against Abercrombie & Fitch.
It is perhaps instructive that Abercrombie’s Norfolk store had the same posters and no one appears to have had a hissy fit. I guess we have fewer of Pat Robertson’s Kool-Aid drinkers in Norfolk. Some of these folks would do better examining their own twisted mean spirited souls than policing the rights of businesses. Not surprisingly, the Virginia Beach Chief of Police was not available for comment. The guy is a dope, in my opinion. Meanwhile, here is the latest from the Virginian Pilot (http://hamptonroads.com/2008/02/beach-plans-drop-charges-against-abercrombie-store):

Stiles said Monday afternoon that the city concluded that, the photos might technically meet the nudity portion of the City Code that makes it a crime to display "obscene materials in a business that is open to juveniles." But they thought it would be difficult to meet the other standards of the law, which say the display needed to appeal to prurient interests, have no redeeming artistic merit and be offensive to the prevailing standards in the community.

Stiles said, of the photo with the men "You might see that typical vision walking down a street." Itzel Vargas, a resident of Panama, [shopping at the mall] said the Abercrombie & Fitch ads didn’t offend her. “I don’t mind if they want to show naked guys because they show naked women everywhere,” she said, pointing down to the Victoria’s Secret store. “What about the Victoria’s Secret commercials on television? That is much worse than the Abercrombie & Fitch ads.” Nikki Hawickhorst, a 18-year-old senior at Kellam High School, said the ad was a little bit risqué because of the semi-nudity. “There’s a lot of worse stuff out there,” she said.
I would also add that the comments posted by Pilot subscribers took the VB police and city management to task in no uncertain terms. Here's a sample comment:
Congrats to who(m)ever decided to complain about the A&F pictures. You launched us into the national spot light and made VB look like a bunch of idiots!! And you probably just helped A&F have a great start to their February sales with the publicity you just generated for them. I see nothing wrong with Abercrombie or their advertising. The problem I have is with people wanting to control every bit of my life from what I wear to what I buy. I have more problems with uptight, conservatve holy rollers that think a little bit of skin is the end of morality and uprising of the devil. Get real!
Posted by Michael-in-Norfolk at Monday, February 04, 2008