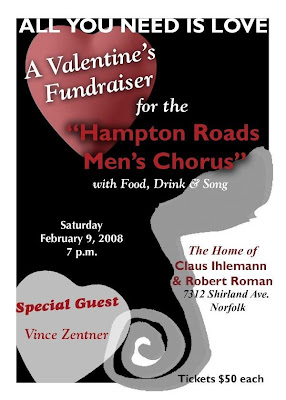 Hampton Roads Men’s Chorus: My firm is a sponsor for tonight’s fundraiser for the Hampton Roads Men’s Chorus. It should be a fun event and a good networking opportunity. The chorus was created over a decade ago to give voice to the LGBT community of the Greater Hampton Roads region. Over the years more than 75 men have been members of the chorus. Local readers interested in attending can buy a ticket here: http://www.steppingout.org/fundraiserevent.htm

Obama Fever: I was speaking with my 80 year old generally Republican voting mother last night to find out about her medical test results and in talking she's all excited about Obama - as is my formerly reactionary Republican brother. Both intend to vote for Obama in Tuesday's Virginia primary. They will NEVER vote for Hillary, rightly or wrongly. My mother has particular concerns over how Hillary would ever control Bill if they were back in the White House. I believe there are thousands and thousands (if not millions) out there in the voting public like them. If the Democrats are foolish enough to nominate Hillary, they'd best get ready to live through another GOP administration under McCain, et al. My mother’s reasoning is that the current way politics is conducted is broken and, while there is uncertain as to what Obama would bring, it is worth taking the risk to attempt to achieve a real change. I plan on trying to make the Obama rally tomorrow in Virginia Beach.

Romance: Prince Charming, where are you? Please sweep me of my feet ASAP.
Posted by Michael-in-Norfolk at Saturday, February 09, 2008