IRAN: STATE MURDER FOR SEX AT 13 -- The Tragic Case of Makwan Moloudzadeh 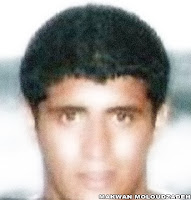 I know I have posted previously about this travesty of justice and flagrant violation of international law. Despite the violation of two international treaties to which it is a signatory, Iran suffers no consequence whatever for such actions. It all sickens me and it is important that we in countries with at least a somewhat free press make sure that this conduct my religious extremist does not go unnoticed and unreported. A photo of the victim is at left. May these monsters in Iran's judicial system burn in Hell where hopefully they will be sodomized and tortured for eternity. Here are highlights form a story by Doug Ireland (http://direland.typepad.com/direland/2007/12/iran-state-murd.html):

Amnesty International released a statement denouncing the execution as a "mockery of justice." The International Gay and Lesbian Human Rights Commission's executive director, Paula Ettelbrick, said in a statement, "This is a shameful and outrageous travesty of justice and international human rights law. How many more young Iranians have to die before the international community takes action?"
And the trial of Makwan, held in June, was indeed a farce"The only witnesses who had given statements to the intelligence police saying they had been raped by Makwan came into court and repudiated those statements, saying that they had been extracted under torture," the only Iranian journalist to have covered Makwan's case extensively, Mitra Khalatbari of the newspaper Etemade Melli, told this reporter by telephone from Tehran. Khalatbari, who covered the story for months and courageously agreed to speak on the record to Gay City News, added, "Makwan himself told the judge that his admission to the Intelligence Police that he had had anal sex with one boy in 1999 was also obtained by torture, and that he now denied it and proclaimed his innocence."

The state murder of young Makwan - who was only 20 if one uses an American calendar, but 21 if one uses an Iranian calendar - was triply illegal, in violation of international law and Iranian law. Two international treaties to which Iran is a signatory - the International Covenant on Civil and Political Rights and the Convention on the Rights of the Child - both forbid the imposition of the death penalty bar for crimes committed before the age of 18. As Human Rights Watch pointed out, "These provisions reflect the reality that children are different from adults. They lack the experience, judgment, maturity, and restraint of an adult." Iran has ratified both those treaties, and has taken no steps to abrogate or nullify them. And, although the Islamic Republic of Iran is one of only nine countries in which homosexuality is still punishable by death, the Iranian penal code forbids execution for sodomy of anyone who is not at least 15 years old - and Makwan was just 13 at the time of the alleged crime.
Posted by Michael-in-Norfolk at Monday, December 10, 2007