Thoughts on Episcopal Diocese of San Joaquin Vote to Secede 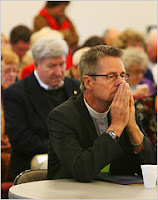 Sadly, as the New York Times is reporting (http://www.nytimes.com/2007/12/09/us/09episcopal.html?ex=1354856400&en=740c5c43a5ead7d6&ei=5088&partner=rssnyt&emc=rss), on Saturday the Episcopal Diocese of San Joaquin voted to secede from the Episcopal Church, citing the Episcopal Church’s ordination of Bishop Robinson as the latest and most galling proof of Episcopal Church's rejection of biblical authority. As is typical, the "conservative faction" base their action on the fact that "the Bible describes homosexuality as an abomination." I was asked to do a column on the issue for Virginia New Source and I have set out the following highlights from the column as to why I believe the Diocese's action was misguided to put it mildly:

The problem, of course is that if one is to claim that the Bible is the inerrant word of God and to be taken literally, one should not be allowed to selectively pick and choose which Bible passages are deemed inerrant and which ones can be conveniently ignored. Most of the anti-gay rhetoric used by those seeking to split within the Episcopal Church or by anti-gay elements in general is based on passages in the Book of Leviticus where a large number of things are described as abominations.

Please do not get me wrong, I believe in the Bible; however, I am among those who do not believe that the Bible is literally true in all instances, and, although I believe that it is the inspired word of God, I believe that not everything it in should be taken literally. Unfortunately, if ALL passages are given the inerrant treatment used by those who oppose ordaining gays or acceptance of homosexuality, for example, then questions such as these need to be answered:

1. A friend of mine feels that even though eating shellfish is an abomination - Lev. 11:10, it is a lesser abomination than homosexuality. I don't agree. Who is correct?

2. Most of my male friends get their hair trimmed, including the hair around their temples, even though this is expressly forbidden by Lev. 19:27. How should they die?

3. Lev. 25:44 states that I may indeed possess slaves, both male and female, provided they are purchased from neighboring nations. A friend of mine claims that this applies to Mexicans, but not Canadians. Who is correct?

4. Lev. 19:19 states that thou shall not let thy cattle gender with a diverse kind; thou shall not sow thy field with mingled seed; neither shall a garment mingled of linen and wool come upon thy body. Must I stop buying poly-wool blend clothing?

5. Lev. 11:12 says anything living in the water that does not have fins and scales is to be detestable to you. Must I give up eating shrimp and scallops?

While these questions are somewhat tongue in cheek, they highlight the obvious ridiculousness that a strict literal application of every Bible passage yields. Even the most rabid opponents to gay ordination or gay rights do not apply all of the foregoing passages – and many other – literally. Only in one area – homosexuality – is this mindless literalism still regularly applied today. If the Episcopal Diocese of San Joaquin is willing to break from the Episcopal Church over the issue of gay ordination, it needs to immediately ban divorce and remarriage and a host of other things banned by a literal reading of the Bible. Otherwise, their action is not in fact based on unswerving loyalty to the Bible but rather plain bigotry against those who are different.

A third reason I believe the Diocese of San Joaquin is in error is that these people who are so afraid of gays in general refuse to recognize that modern day scientific knowledge of human sexuality and its inherent nature were unknown and not understood by the ignorant (by today’s standards), nomadic, tribal writers of the Old Testament. Passages in Paul’s epistles condemning homosexual conduct pick up directly from these same Old Testament passages. These same authors thought the earth was flat and the center of the universe and that the sun revolved around the earth. Isn't it just possible, they were likewise mistaken about their condemnations of same sex relations? I truly cannot envision the mind set/world view of fundamentalists who refuse to ever admit that the Bible is NOT 100% accurate on all kinds of factual/historical matters that can be demonstrably shown to be inaccurate by modern science and knowledge. Their religion is a religion of fear and hate of others. This is decidedly NOT what Jesus preached.
Meanwhile, the New York Times story indicated the future now facing the break away diocese. So much time, money and resources that could be utilized more productively to further the Gospel message:
The Episcopal Church has said that people can depart, but they must leave their property, which, it contends, is held in trust for the church. If the diocese sticks to its position, the church would likely vacate the diocese and reconstitute it with the congregations that choose to remain and a new bishop. The church and loyalist dioceses are already involved in several lawsuits against breakaway congregations that have insisted on keeping their property.
“The Episcopal Church receives with sadness the news that some members of this church have made a decision to leave this church,” Bishop Jefferts Schori said in an e-mail statement after the vote. “We deeply regret their unwillingness or inability to live within the historical Anglican understanding of comprehensiveness. We wish them to know of our prayers for them and their journey. The Episcopal Church will continue in the Diocese of San Joaquin, albeit with new leadership.”
Posted by Michael-in-Norfolk at Sunday, December 09, 2007

You say "4. Lev. 19:19 states that thou shall not let thy cattle gender with a diverse kind; thou shall not sow thy field with mingled seed; neither shall a garment mingled of linen and wool come upon thy body. Must I stop buying poly-wool blend clothing?" Yes, you must stop buying poly-wool blends! That is an abomination! Linen and wool is fine. Cotton and linen is fine. It's the natural fibers that are important. Polyester feels so nasty! Yes, I know, it wears better, the clothing lasts longer and resists stains better. But it feels nasty! I prefer 100% cotton whenever possible. Linen is excellent, but hard to find these days.
As far as the other stuff goes, I don't give a shit. I ate some cream of shrimp soup last night and it was pretty good (for something quick that came from a can). Get me to a lobster place and I'll feast.
In all seriousness, this is a sad thing the church has come to. As I think you know I have been struggling with some of these issues myself. I hold onto my faith in God, but my perceptions are changing somewhat. I like the tone of your column here. I hope it makes a difference for at least a few people. Good luck.

I am impressed that the Episcopal Church is letting the break happen rather than renege its ordination of Bishop Robinson. But then, I'm good at finding silver linings.

Michael, may I offer three questions for consideration? I think we need get back to some basic theology.

Question 1: "Is sex necessary for salvation?"
Answer: "Jesus never said it was."

Question 3: "Why are we fighting over sex when we should be doing those things that are necessary for each of our salvations: clothe the naked, feed the hungry, visit the sick and those in prison?"
Answer: "Jesus did say, "clothe the naked..."

All of the money going to courts and lawyers will not go to the poor, hungry, and ill. That is the true sin of the situation.

As you know, I shared your thoughts on this matter on The Wild Reed.