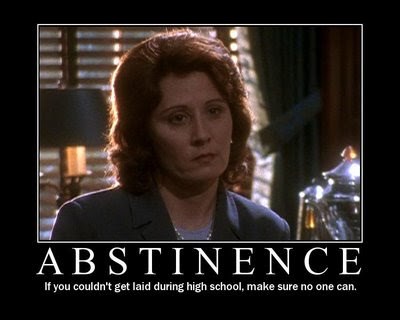 This Washington Post article shows (http://www.washingtonpost.com/wp-dyn/content/article/2007/12/15/AR2007121500773.html?nav=hcmodule)that that people - and states, Virginia included - are waking up to the fact that the abstinence only sex education classes much loved by the Chimperator and the Christofascists of the far right (no doubt because some of their organizations have been able to suck at the government money trough under this ruse) do not work. Hello, what a surprise!! I think most teenagers (if not to mention higher grade elementary students) could have predicted this outcome.
Once again, the religious agenda of Bush and the members the lunatic far right - Victoria Cobb of The Family Foundation here in Virginia springs to mind - ignore reality and common sense to push their agenda of attempting to force their religious views on all. Why the Democrats in Congress do not act to CUT funding rather than increase it is dumbfounding. To me it is one more proof that the Democrats lack any back bone and will not challenge the Chimperator head on. Why they allow a president with some of the lowest approval ratings ever to bully them mystifies me. Stand up and fight, damn it! P. S. the photo above is dedicated to Ms. Cobb also pictured above, who I suspect is borderline frigid at best since she goes into near spasms at the mention of that dirty word, sex. Here are some story highlights:
The number of states refusing federal money for "abstinence-only" sex education programs jumped sharply in the past year as evidence mounted that the approach is ineffective. At least 14 states have either notified the federal government that they will no longer be requesting the funds or are not expected to apply, forgoing more than $15 million of the $50 million available, officials said. Virginia was the most recent state to opt out. Two other states -- Ohio and Washington -- have applied but stipulated they would use the money for comprehensive sex education, effectively making themselves ineligible, federal officials said. The number of states spurning the money has grown even as Congress considers boosting overall funding for abstinence-only education to $204 million, with most of it going directly to community organizations.
This wave of states rejecting the money is a bellwether," said William Smith of the Sexuality Information and Education Council of the United States, a Washington-based advocacy and education group that opposes abstinence-only programs. "It's a canary in the coal mine of what's to come." Smith and other critics said they hoped that if enough states drop out, Congress will redirect the funding to comprehensive sex education programs that include teaching about the use of condoms and other contraceptives. "I think this could be the straw that breaks the camel's back in terms of continued funding of these programs," said John Wagoner of Advocates for Youth, another Washington advocacy group. "How can they ignore so many states slapping a return-to-sender label on this funding?"
The jump in states opting out follows a series of reports questioning the effectiveness of the approach, including one commissioned by Congress that was released earlier this year. In addition, federal health officials reported last week that a 14-year drop in teenage pregnancy rates appeared to have reversed. "This abstinence-only program is just not getting the job done," said Cecile Richards of the Planned Parenthood Federation of America. "This is a ideologically based program that doesn't have any support in science." "The governor has often stated that abstinence-only education does not show any results," said Gordon Hickey, a spokesman for Virginia Gov. Timothy M. Kaine (D), who announced plans to give up the funding last month. "It doesn't work. He's a firm believer in more comprehensive sex education."
Posted by Michael-in-Norfolk at Saturday, December 15, 2007