A Defector From Conservatism's Take on Trump’s Rise 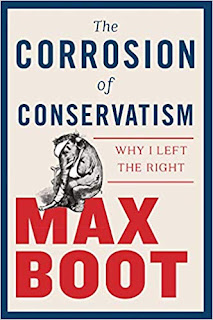 Perhaps being gay helped push me to be ahead of the curve in leaving the Republican Party. Once the Party began to embrace out right lying - something that in my view directly correlates to the rise of Christofascists in both the Party base and local committees - as what I like to think as a moral person I felt I had two choices: leave and fight against lies and untruths or stay and become part of the problem and complicit in the wrongful and immoral behavior. That many of the lies and hatred being ginned up for political expediency certainly made the decision to leave the GOP easier for me.  Others, however, chose to remain in the GOP and, sadly, some are happily drinking the "Kool-Aid" and busily disseminating right wing trash and lies - two "friends" on Facebook embody the phenomenon.  Then there is a third group that remained in the GOP until the rise of Trump at which time they could no longer countenance the Party's rank racism, embrace of ignorance, homophobia and desire to brutalize the majority while showering tax breaks and riches on the wealthy.  Some of the more notable of  these include Joe Scarborough, David Frum, Jennifer Rubin, Andrew Sullivan, and Max Boot.  In a piece in New York Magazine, Boot's ultimate defection from the GOP as laid out in his book The Corrosion of Conservatism: Why I Left the Right.   Here are article highlights that lay out why the rise of Trump should have been the breaking point for thinking, moral conservatives:

When Max Boot was a young conservative apparatchik on the make, the key moment in his career occurred when he got a meeting with Robert Bartley, editor of The Wall Street Journal editorial page, one of the movement’s most prestigious and influential organs. To Boot’s surprise, Bartley offered him a job as economics editorialist. The prospect “horrified” him, he writes in his new memoir and critique, The Corrosion of Conservatism: Why I Left the Right, because he “had never taken a class in the subject and had no interest in it.” Boot later learned that Bartley sought out conservatives unfamiliar with economics for such jobs. “He did not want to hire an economist because most professional economists disdained supply-side economics,” which is to say, an inability to see through the pseudo-economic nonsense was a cherished attribute.

[T]he minute he discovered that the economics line for the conservative movement was being set by an institution so hostile to rigorous thinking that it treated a lack of qualifications as a qualification, Boot probably should have rethought his career choices. Instead, he accepted a different job (op-ed editor) from Bartley. And he was on his way, moving through columnist spots and jobs as speechwriter or policy adviser to Republican presidential candidates like John McCain and Marco Rubio.

It came to a halt with the rise of Donald Trump. Boot, like most conservative intellectuals, reacted with incredulous disdain when a demagogic reality-television performer registered at the top of opinion polls in 2015. Most of those conservatives eventually reconciled themselves to Trump, either after Trump had sewn up the nomination, following his election, or after one of his many partisan skirmishes, at which point they could declare that the liberals had “forced” them to Trump’s side by criticizing Trump too harshly, opposing Brett Kavanaugh, or some other offense. Boot did not. Instead, he has written one of the most impressive and unflinching diagnoses of the pathologies in Republican politics that led to Trump’s rise.

Boot is hardly a surprising candidate for ideological defection. Having immigrated to the United States as a child from the Soviet Union, he gravitated toward the more stridently hawkish Republican Party, as many refugees from communist countries did. He never surrendered either his sense of outsiderness (having had to learn English and assimilate to strange American culture) or his intense pro-American idealism.

Of all the intellectual tribes of the right, neoconservatives (like Boot) mounted the deepest and longest resistance to Trump.  The core neocon worldview is a moralistic vision in America as a beacon of democracy and staunch foe of dictatorships (sometimes, as the Bush administration illustrated, to the point of delusion.)

[W]hat makes Boot’s argument admirable is that he doesn’t simply follow his ideology in a mechanical fashion. Instead he treats the rise of Trump with the seriousness an event of such magnitude demands. If you discovered your best friend was working on a plan to kill hundreds of people in a terrorist attack, you wouldn’t simply condemn his plan while continuing to appreciate his non-terrorist qualities. You would question your entire relationship and what it is about this person you missed in the first place. Likewise, when your political party has elected an ignorant, viciously bigoted, compulsively lying authoritarian crook as president, you need to raise fundamental assumptions about that party’s makeup, rather than treat it as an unfortunate turn of events one must muddle through.
He describes his rise within the movement as “a process of indoctrination — largely self-indoctrination, I should add — that took decades and that I am only now escaping.” Boot recounts the social pressures to toe the party line, and the rewards (career advancement, lavish parties) that came with faithful adherence. At one point he commissioned an op-ed criticizing supply-side economics by Paul Krugman, who was not yet a New York Times columnist but was a famous economist with a punchy prose style. Bartley not only killed the op-ed but also came close to firing Boot for his apostasy.

Boot recounts briefing Sarah Palin, in his capacity as a McCain 2008 campaign adviser. (Unsurprisingly, he “found her to be nonresponsive and uninterested in foreign policy issues.”) After he began criticizing Trump, Boot describes the president of a conservative think tank expressing private agreement, but admitting he could not say so publicly for fear of offending his board of directors. When a friend got an appointment in the administration, she crossed Boot off the guest list for a party lest she be associated with a turncoat.

[T]the truly radical act in The Corrosion of Conservatism is its clear-eyed excavation of the movement’s history. The right has spent decades regurgitating a potted version of their own history that is so selective and sanitized that it amounts to an upside-down version of reality.

Boot acknowledges that he, too, subscribed to this myth. But revisiting that past, he discovers something very familiar. Conservatism trafficked all along in anti-intellectualism, bigotry, ideological radicalism, and loopy conspiracy theories. The conservative movement was a revolt against the moderation of mainstream Republicans like Dwight Eisenhower while fiercely defending the vicious lies of Joe McCarthy. Buckley renounced the president of the John Birch Society while continuing to endorse the organization itself, which was a large and powerful constituency. While most mainstream Republicans at the time supported civil rights, conservatives opposed those mainstream leaders for that very reason. Conservatives understood very clearly at the time that their project of turning the Republican Party into a vehicle for conservatism required prying millions of white segregationists from the Democratic Party.

Boot is not so reductive as to depict Trump as the inevitable historical consequence of conservatism’s historical arc. He is able to acknowledge that Trump is both a freakish outlier and an authentic outgrowth of conservatism. The movement had cultivated an atmosphere congenial to his bigoted demagoguery, and a freakishly dangerous figure walked through the door conservatism had opened for him.

But it is hard to see any choice between Boot’s radical surgery, which will require ripping the party’s conservative dogma out by the roots, and disaster for the brand of center-right values he espouses. The disaster may take the form of Trump and his party continuing their lurch into authoritarianism, which increasingly offers the only avenue for imposing unpopular policies on taxes, spending, and regulation demanded by its plutocratic base. Or it may involve the Republican Party discrediting itself irrevocably, as polarization allows Democrats to move farther and farther left without losing the loyalty of a base that will never forgive the party of Trump. A disaffected foot soldier from the conservative movement can now clearly see that the party’s salvation lies in prying it free of conservative control.

What upsets me the most about "friends" who have drunk the Trump/GOP Kool-Aid is that the have chosen to embrace immorality and the deliberate harm to and demonizing of others.   This is not mere a difference in political views, rather it goes to morality and decency themselves. In my view, one can no longer claim to be moral and decent yet support today;s Republican Party.  The two are mutually exclusive.
Posted by Michael-in-Norfolk at Saturday, October 20, 2018