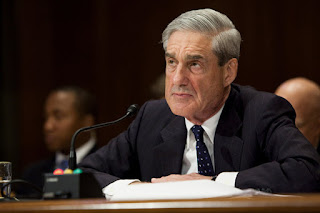 With all of the other news occupying the media, the Russiagate investigation has fallen below the radar screen.  But that does not mean that Robert Mueller and his team have been idle.  As Bloomberg reports, it is expected that Mueller will unveil key findings shortly after the 2018 midterm elections.  The big question, of course, is to what lengths Donald Trump and Vichy Republicans will go to bury the report and keep it from the public.  Many predict that Trump will fire Deputy Attorney General Rod Rosenstein after the midterms and seek to appoint a replacement who will do Trump's bidding and close down the investigation which has seen numerous indictments and a number of guilty pleas from Trump campaign officials.  The investigation has proven itself to be anything but a "witch hunt" as screeched by Der Trumpenführer and his 1930's German-like supporters. Here are highlights from Bloomberg on where the matter stands currently:


Special Counsel Robert Mueller is expected to issue findings on core aspects of his Russia probe soon after the November midterm elections as he faces intensifying pressure to produce more indictments or shut down his investigation, according to two U.S. officials.

Specifically, Mueller is close to rendering judgment on two of the most explosive aspects of his inquiry: whether there were clear incidents of collusion between Russia and Donald Trump’s 2016 campaign, and whether the president took any actions that constitute obstruction of justice, according to one of the officials, who asked not to be identified speaking about the investigation.

That doesn’t necessarily mean Mueller’s findings would be made public if he doesn’t secure unsealed indictments. The regulations governing Mueller’s probe stipulate that he can present his findings only to his boss, who is currently Deputy Attorney General Rod Rosenstein. The regulations give a special counsel’s supervisor some discretion in deciding what is relayed to Congress and what is publicly released.

The question of timing is critical. Mueller’s work won’t be concluded ahead of the Nov. 6 midterm elections, when Democrats hope to take control of the House and end Trump’s one-party hold on Washington.

But this timeline also raises questions about the future of the probe itself. Trump has signaled he may replace Attorney General Jeff Sessions after the election, a move that could bring in a new boss for Mueller. Rosenstein also might resign or be fired by Trump after the election.

With three weeks to go before the midterm elections, it’s unlikely Mueller will take any overt action that could be turned into a campaign issue. Justice Department guidelines say prosecutors should avoid any major steps close to an election that could be seen as influencing the outcome.

That suggests the days and weeks immediately after the Nov. 6 election may be the most pivotal time since Mueller took over the Russia investigation almost a year and a half ago. So far, Mueller has secured more than two dozen indictments or guilty pleas.

Several matters could keep the probe going, such as another significant prosecution or new lines of inquiry. And because Mueller’s investigation has been proceeding quietly, out of the public eye, it’s possible there have been other major developments behind the scenes.

Mueller’s prosecutors also have met with Michael Cohen, Trump’s former personal lawyer. Cohen pleaded guilty in New York in August to tax evasion, bank fraud and violations of campaign finance laws. That separate investigation, headed by the U.S. Attorney’s Office in Manhattan, is one of several New York probes involving the Trump Organization, and could ultimately prove to be more damaging to [Trump] the president than Mueller’s work.

Manafort is also key to understanding a June 2016 meeting at Trump Tower between Donald Trump Jr. and a group of Russians who had promised damaging information concerning Clinton, the former official said.

Manafort appears to have good material to offer, said Samuel Buell, a former federal prosecutor who teaches at Duke University School of Law. “He’s not going to get that deal unless he can help Mueller make a case against one or more people,” Buell said. Cooperators can’t expect leniency unless they provide "substantial assistance in the prosecution of others," Buell added, citing sentencing guidelines.

Even if Mueller’s probe stretched through 2019, the timeline wouldn’t be unprecedented. Independent Counsel Kenneth Starr spent four years investigating President Bill Clinton before releasing his report on the Monica Lewinsky affair, which spun out of a probe into an Arkansas land deal known as Whitewater.

It took almost two years for Special Counsel Patrick Fitzgerald to indict Scooter Libby, Vice President Dick Cheney’s chief of staff, for lying to investigators and obstruction of justice in October 2005 in the investigation into the public outing of CIA agent Valerie Plame.


Posted by Michael-in-Norfolk at Wednesday, October 17, 2018

Fingers crossed. We all know why Cheeto put Kavanough in SCOTUS, so....