How Hurricane Michael May Impact the Midterm Elections 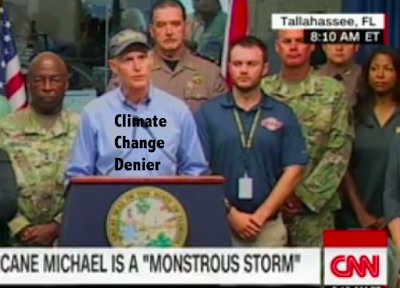 Hurricane Michael not only devastated a significant portion of the Florida panhandle, it also may have damaged current GOP governor Rick Scott's election chances in the U.S. Senate race.  The areas devastated are a part of the red, GOP voting area of the state and Scott could lose tens of thousands of potential votes on November 6, 2018, as a consequence. In Georgia, the rural areas most damaged, in contrast, include some of the poorest, highest minority voting part of that state and, combined with the GOP vote suppression campaign of the GOP gubernatorial candidate could harm the Democrat candidate.  If Scott - who has been terrible on environmental issues and somewhat of a climate change denier, should lose the election due to a climate change enhanced hurricane, there would certainly be some sweet irony at play.  A piece in New York Magazine looks at the situation.  Here are highlights:


The speed with which Hurricane Michael swept through Florida’s panhandle and then through Georgia and the Carolinas last week made it hard to grasp how much damage it had inflicted. The death toll is 29 and still rising as bodies are discovered in the wreckage. Bay County, Florida, where Michael made landfall, has been devastated, with many residents displaced. Power is still out in eleven Florida counties, and cell phone service could take a long time to resume thanks to damaged fiber networks. Countless roads and streets have been torn up.

The impact on elections is hardly the fifth or sixth thing on survivors’ minds, but it cannot help but concern the politicians making decisions in the wake of the disaster, such as Florida Governor Rick Scott, who is in a tight Senate race with Bill Nelson, or Tallahassee Mayor and gubernatorial candidate Andrew Gillum, whose city lost power for a while and had to deal with tree-blocked roads and also many thousands of refugees from the Gulf Coast. Campaigning and polling (including the internal polls that operate as a campaign’s critical intel system) have stopped indefinitely in the Sunshine State. And there are other more concentrated political implications, as Politico notes:

The state’s Senate and gubernatorial races are virtually tied at the moment — and 8 of the 11 counties without power, an area affecting 135,000 customers, are Republican-performing counties…. [O]ne Republican familiar with the affected counties said the party is bracing for a net loss of 20,000 votes that Scott or Republican Ron DeSantis in the race for governor would otherwise receive.

Scott has the power to delay state elections if he finds that emergency conditions prevent a full and fair vote. He cannot, however, delay federal elections like the one in which he is currently engaged. A decision on that front needs to come quickly, since absentee voting by mail has already begun (Florida’s in-person early voting doesn’t begin until October 27). This is a state where 68 percent of ballots were cast before election day in 2016. Republicans might have an advantage in a delayed election in which lower-income voters are less likely to participate, but it would be quite a crap-shoot by Scott, particularly if it resulted in different federal and state election calendars.

In Georgia, the other state Michael hit with hurricane force, in-person early voting began this week. A complication there is that the supervisor of election infrastructure, Secretary of State Brian Kemp, is the Republican nominee for governor, and is renowned for his voter suppression habits involving the low-income and minority citizens most likely to be affected by a natural disaster.

In both these states top elected officials are having to balance the need to appear compassionate and even-handed with their own narrow political interests. Challengers like Florida’s Democratic gubernatorial candidate Gillum and his Georgia counterpart Stacey Abrams can only watch carefully and hope their storm-afflicted supporters don’t take a second hit from the Republicans running the elections.

It goes without saying that I am hoping that Scott and Kemp both lose their races.
Posted by Michael-in-Norfolk at Thursday, October 18, 2018

If Rick Scott is re-elected, Florida is fucked. But it's Florida after all, and like in many Southern states, Repugs have been in power for a long time. And if the Cheeto in Charge (a stable genius that knows science ' a lot') is a climate change denier, what's to expect from his minions. And don't get me started with voter suppression...