Don't Fall for GOP Claims on Protections for Preexisting Conditions 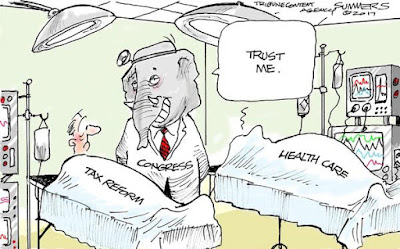 At times I am amazed at how stupid Republicans think the public is when it comes to believing their lies.  True. with Trump supporters, especially evangelical Christians who tend to be the least educated segment of society, there is a high level of stupidity, some fueled by intellectual laziness and some spurred by racism to which the GOP has played ever since the rise of Richard Nixon's "southern strategy."  But when it comes to health care - especially maintaining protections for preexisting conditions - anyone paying any attention can see that the rhetoric that one is hearing from Republican congressional candidates is 180 degrees the opposite of the votes and actions over the last two years.  For example, how can one be a champion of protecting preexisting conditions (as claimed by Republican Senate candidate Josh Hawley who hopes to unseat Democrat Claire McCaskill) while in charge of a state filed lawsuit seeking to end those very protections.  Locally, the same holds true for Rep. Scott Taylor who is singing one line now, but voted very differently.  A piece in the Washington Post looks at GOP lies which are in high gear as election day approaches.  Here are excerpts:

What began over the summer as a halfhearted attempt by Republicans to push back against Democratic attacks on the issue of health care has exploded into a full-throated reversal of their positions, particularly on protections for sick Americans.

In Missouri, Republican Senate candidate Josh Hawley has been hammered by the woman he hopes to unseat, Democrat Claire McCaskill, for being among the attorneys general who have asked a federal court to render unconstitutional the Affordable Care Act, or Obamacare, which compelled insurance companies to cover those with preexisting conditions.

“You don’t go to court and get rid of important protections when there is no backup, when people will be in a free fall,” McCaskill said in a debate Thursday night.

In Texas, where he is trying to beat back a well-financed challenge by Democratic Rep. Beto O’Rourke, Sen. Ted Cruz said in a debate Tuesday that he would “protect preexisting conditions.” Cruz forced a government shutdown in 2013 over his effort to repeal Obamacare.In a House race in California, Republican Rep. Dana Rohrabacher is, like Hawley, using his child’s illness to attest to his embrace of protections for preexisting conditions, even though he repeatedly voted to quash the Obamacare bill that first secured them.

Democrats and health-care specialists say that the proposals being put forward by Republicans contain exemptions that mean the sick would not be fully protected or would be charged exorbitant rates for coverage, as they were before the ACA became law.

Still, the sudden scramble by Republicans underscores the speed with which voters have also reversed themselves on the most popular provisions of the act, even as Republicans worked relentlessly to repeal them. It also raises a political irony: The same issue that gave birth to the tea party and propelled Republicans to power in the 2010 midterm elections could cost them dearly eight years later.

Republicans appeared to have been caught flat-footed about the change in voter opinion about insurance coverage, which has been cited by voters in multiple polls this year as the issue they care most about.

[A]s the GOP shifted its focus to tax cuts — which have not gained traction among voters — Democrats built an entire midterm campaign strategy around preserving the law’s most popular provision.

The actions of Republicans, including the president, before this election year have not matched their rhetoric over the past few weeks.  For more than eight years, their greatest and most unifying party rallying cry has been repealing Obamacare.

Trump also has bragged repeatedly about his administration’s many steps to undermine the law and water down protections, even as his administration has refused to defend any part of the law against the lawsuit filed by Republican attorneys general.“I think the big issue is the brazenness [with] which this mantle is being put on to say this is something they’ve always supported,” said Sabrina Corlette, professor of health policy at Georgetown University.  Most health-policy experts say the Republican position is contradictory because without a replacement plan in place, people with past or existing illnesses would lose the protections they have now.

“The irony is that what allowed the House to pass [the repeal bill] was a proposal to weaken protections for preexisting conditions. This was not an obscure part of the debate,” said Larry Levitt, senior vice president for health reform at the Kaiser Family Foundation.


If you care about health care coverage - and Social Security and Medicare - the only option is to vote Democrat on November 6, 2018.  Do not fall for the GOP lies.
Posted by Michael-in-Norfolk at Saturday, October 20, 2018