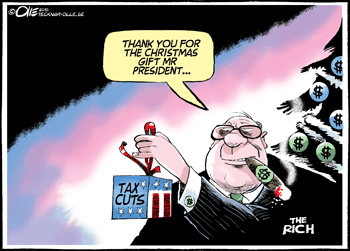 One need not be a math whiz to do the math involved in comparing the amount of the massive Trump/GOP tax cuts to the very wealthy and huge corporations with the amount by which the federal deficit is soaring.  Yet, Mitch McConnell is ignoring this simple arithmetic exercise and is blaming the federal deficit on "entitlements" such as Social Security and Medicare into which American taxpayers have been paying funds their entire working lives.  In my own case, over the years, I have paid a very large sum into Social Security and Medicare, yet McConnell is depicting me and millions like me as greedy, irresponsible freeloaders looking for a free give away.  Meanwhile, McConnell and his wife have parlayed their political positions to become very wealthy and, in McConnell's case, he enjoys a platinum retirement package that relieves him of the financial concerns the rest of us have to deal with.  The man is despicable.  Give massive tax cuts to the obscenely wealthy and then demand cuts to programs for the poor, the middle class, and the elderly.  This from a man and political party that pretends to honor "Christian values."  A piece in Bloomberg looks at this foul batshitery.  Here are highlights:

“It’s disappointing, but it’s not a Republican problem,” McConnell said Tuesday in an interview with Bloomberg News when asked about the rising deficits and debt. “It’s a bipartisan problem: unwillingness to address the real drivers of the debt by doing anything to adjust those programs to the demographics of America in the future.”

McConnell’s remarks came a day after the Treasury Department said the U.S. budget deficit grew to $779 billion in Donald Trump’s first full fiscal year as president, the result of the GOP’s tax cuts, bipartisan spending increases and rising interest payments on the national debt. That’s a 77 percent increase from the $439 billion deficit in fiscal 2015, when McConnell became majority leader.

Shrinking those popular programs -- either by reducing benefits or raising the retirement age -- without a bipartisan deal would risk a political backlash in the next election. Trump promised during his campaign that he wouldn’t cut Social Security, Medicare or Medicaid, even though his budget proposals have included trims to all three programs.

The Office of Management and Budget has projected a deficit in the coming year of $1.085 trillion despite a healthy economy. And the Congressional Budget Office has forecast a return to trillion-dollar deficits by fiscal 2020.

Republicans in December 2017 also passed a tax cut projected to add more than $1 trillion to the debt over a decade after leaders gave up on creating a plan that wouldn’t increase the debt under the Senate’s scoring rules.

Senate Minority Leader Chuck Schumer of New York responded Tuesday by saying McConnell and other Republicans “blew a $2 trillion hole in the federal deficit to fund a tax cut for the rich. To now suggest cutting earned middle-class programs like Medicare, Social Security and Medicaid as the only fiscally responsible solution to solve the debt problem is nothing short of gaslighting."

House Minority Leader Nancy Pelosi of California said in a statement, “Under the GOP’s twisted agenda, we can afford tax cuts for billionaires, but not the benefits our seniors have earned.”

Posted by Michael-in-Norfolk at Wednesday, October 17, 2018

Ugh. I hate The Turtle. Fuck McConnell and all those spineless repugs.