Democrats Seem Set to Equal or Exceed Republicans in Turnout 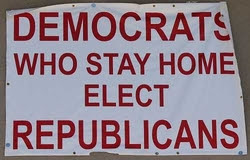 One of the most maddening things to me is the fact that Millennials and minority voters - those most likely to be harmed by the Trump/Pence/GOP agenda in the long term - do not vote and, as a result, contribute to self-harm.   Voting may not halt the regressive, racist GOP agenda, but not voting definitely furthers the agenda that seeks to take from the poor and give to the rich and restore white/Christofascist privilege not seen in decades (indeed, they Jim Crow laws would be restored if the federal courts would allow it - one reason Trump is packing the courts with reactionaries).  Polls indicate that Democrats may be poised to vote in record numbers for a midterm election, but Millennial and minority voters remain less likely to vote than their self-interest should dictate.  A piece in the New York Times looks at surging Democrat turn out in white suburban districts that may match or exceed Republican turn out levels.  Here are article highlights:

A wide range of evidence indicates that Democratic voters are poised to vote in numbers unseen in a midterm election in at least a decade.

Democrats have largely erased the turnout deficit that hobbled them during the Obama presidency, according to results from more than 50 New York Times Upshot/Siena College polls of the most competitive House battleground districts.

Democrats may even be poised to post higher turnout than Republicans, a rarity, in many relatively white suburban districts on Nov. 6.

But it’s not clear if this blue turnout surge will extend much further, particularly among young and nonwhite voters. Whether Democrats turn out broadly could make the difference between a fairly close fight for control of the House and sweeping Democratic gains of 40 or more seats.

Across the Times/Siena polls, Republicans have a six-point lead among voters who turned out in 2014. But Democrats counter with a 10-point advantage among voters who didn’t turn out in that election. Those voters are poised to represent more than one-third of the electorate, enough to essentially eliminate the Republican turnout advantage of the last decade.

A similar pattern has played out in the special and general elections during the Trump presidency: Democratic turnout has surged over 2014 levels to essentially match that of Republicans.

Over the last two years, 60 percent of Democrats (defined by either party registration or primary vote history) voted compared with 58 percent of Republicans in the New Jersey and Virginia general elections, along with the special congressional elections in Kansas’ Fourth District, Pennsylvania’s 18th, Ohio’s 12th, Georgia’s Sixth and Arizona’s Eighth. In these same jurisdictions in 2014, Republicans had an eight-point edge, with 62 percent voting versus 54 percent of Democrats.

[T]urnout among young and nonwhite voters always trailing older and white turnout by a wide margin. That tends to cut against Democratic strengths.Across our polls, 58 percent of white registered voters say they’re “almost certain” to vote, compared with 50 percent of black registered voters and 43 percent of Hispanic voters. These figures are somewhat lower than in other surveys, in part because the Times/Siena surveys make a considerable effort to reach lower-turnout voters who respond to polls in low numbers.And just 38 percent of registered voters who are 18 to 34 years say they’re almost certain to vote, compared with 62 percent of those over age 65.It is entirely possible that these generational and racial turnout gaps will narrow over the election’s final weeks, as the campaigns work to mobilize irregular voters. There may also be individual races or states, like Georgia, where black voters turn out in large numbers. But there is no historical precedent for those gaps to close to the extent they do in a presidential election, at least not nationwide.Yet Democrats have still managed to fare extremely well in Trump-era special and general elections, in no small part because of a surge in well-educated voters. That’s what the Times/Siena polling shows as well.Over all, college-educated Americans represent 47 percent of likely voters in the districts we’ve polled, well above their 38 percent share of registered voters. And white voters without a degree — the president’s base — slip to 41 percent of the likely electorate, down from their 45 percent share of registered voters.The diverse districts in Arizona, California, Florida, Texas, North Carolina, New Mexico and Virginia include more than one-third of the tossup districts. If Democratic turnout remains somewhat depressed, these districts could help the Republicans fend off a blue wave and at least keep them in striking distance of retaining their majority. Democrats, though, can regard the districts as offering plenty of opportunities heading into the final stretch. The Democrats there are saying they’re less likely to vote and are likelier to be undecided, reflecting low political engagement.

If Democrats can lure additional young and nonwhite voters off the sidelines and out of the undecided column, the party could be poised to break through in many of the districts where they’ve struggled the most to this point.

If you have Millennial or minority family members of friends, stress to them the importance of voting and of thwarting the GOP agenda that is decidedly against their best interests.
Posted by Michael-in-Norfolk at Friday, October 19, 2018