The Shortsighted GOP Push for Kavanaugh 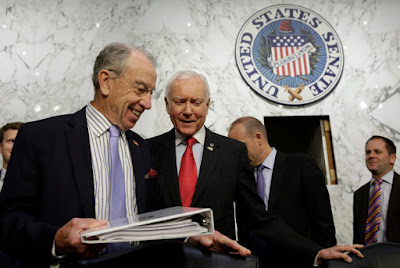 As I have often noted, for eight (8) years I was a precinct chair member of the City Committee for the Republican Party of Virginia Beach.  I even filed the articles incorporating the body with the State Corporation Commission.  Back in those days, part of the Party agenda was planning for the long term future of the Party.  Those days are long gone and now, perceived short term expediency trumps all else - no pun intended - and there seems to be no thought of what short term actions may trigger in the long term.   The trend began back shortly before I resigned from the GOP when Christofascists were voted onto local city and county committees with the short term view of rallying "conservative Christians" to support the Party.  Since then, white supremacists have been welcomed in and, in the figure of Brett Kavanaugh, anti-women misogynists have been welcomed to the GOP fold.  Meanwhile, the younger voters, Hispanics, college educated voters and minorities - the growing segments of the electorate - have been driven into the arms of the Democrats.  A piece in The Atlantic looks at the long term repercussions Republicans may suffer if the ram through Kavanaugh's confirmation.  Here are excerpts:

By refusing to call other witnesses, or enlist the FBI in a fact-finding investigation, or summon relevant witnesses, Senate Republicans have systematically steered the hearing into a cul-de-sac of competing memories between Ford and Kavanaugh. The plan to vote on the nomination within days gives away the game: No one would schedule votes that quickly if they were committed to fully evaluating whatever testimony Ford provides on Thursday, much less the other charges confronting Kavanaugh.

The allegations from Avenatti’s client, Julie Swetnick, could scramble Republicans’ decision making. But even if the Senate pushes forward and confirms Kavanaugh, the battle over his selection is virtually guaranteed to continue. Indeed, it’s already possible to identify at least four distinct rounds of future electoral and legislative conflict over Kavanaugh if he’s confirmed.

The 2018 election: The Kavanaugh controversy erupted as polls were already showing a threat to GOP candidates this fall, in the form of an intense backlash against Donald Trump that’s fueling unprecedented deficits among college-educated white women and energized turnout among African American women. Democrats have positioned themselves to benefit from that energy by nominating a record number of women in House, Senate, and gubernatorial elections.

Republicans have feared that if they don’t confirm Kavanaugh, they will depress turnout among their base supporters. But elevating him to the Supreme Court amid these allegations risks compounding their problems with the female voters already most hostile to Trump (partly for his own history of alleged sexual abuse). Even before Ford testifies, nearly three-fifths of college-educated white women opposed Kavanaugh’s confirmation in a recent Fox News poll. . . . The fierce recoil from Trump among college-educated white women is the single greatest source of Republican vulnerability in House races this year; if the party’s defenses among blue-collar white women also crack, a difficult election night could turn disastrous.

A House investigation: Democrats frustrated that Republicans have refused to fully investigate the allegations against Kavanaugh—or examine evidence suggesting that he provided false or misleading testimony on multiple issues in previous confirmation hearings—would get another chance to revisit those questions if the party wins the House majority in November. Brian Fallon, the executive director of Demand Justice, a Democratic group that advocates on judicial nominations, says he is “100 percent certain” a Democratic-controlled House Judiciary Committee “would seek to reopen investigations that Republicans during this process have refused to conduct.” . . . at the very least, Kavanaugh could face a more searching examination than Senate Republicans have conducted if he’s confirmed.

The 2020 election: Republicans expect Kavanaugh to tip the Court’s balance by providing a more reliably conservative vote than Anthony Kennedy, the justice he would replace. The paradox is that the more a Justice Kavanaugh would fulfill these expectations, the more he would renew the animosity over his confirmation. “It won’t just be something that will be easily forgotten, because you will have decisions coming out that he will be the fifth vote for,” Fallon notes. The clouds shadowing Kavanaugh would intensify the backlash on the left if he were to provide decisive votes on contentious issues. That would potentially raise the Court’s relevance in the 2020 presidential election, particularly if the legal right to abortion is rescinded or hollowed out by five male, Republican-appointed justices, two of whom (Kavanaugh and Clarence Thomas) have been accused of sexual misconduct.

After 2020: If Kavanaugh is confirmed, he will cement a Republican-appointed Court majority whose oldest member (Thomas) is only 70. That means, health permitting, the majority could function into the 2030s as a barricade against Democratic priorities, such as strengthening environmental regulation, protecting voting rights, or expanding civil-rights protections around race, gender, and sexual orientation.

If Democrats regain unified control of the White House and Congress in 2020 or thereafter, that prospect could inspire the first serious effort to enlarge the Court’s membership since Franklin D. Roosevelt tried and failed in his second term. Lingering resentment over the GOP’s refusal to consider Merrick Garland’s nomination to the Court under former President Barack Obama has already spurred discussion about a future effort to add more justices, which Congress can do without a constitutional amendment. It won’t ever be easy to pass legislation changing the Court’s structure. But the hardening Democratic belief that Kavanaugh’s nomination was tainted could increase pressure to explore the option in the years ahead if he is confirmed.

As to Lindsey Graham's bizarre behavior in supporting Kavanaugh, my comment is as follows:  I wish Graham would come "out of the closet" so that Trump or whoever in the GOP could no longer blackmail him.

Posted by Michael-in-Norfolk at Thursday, September 27, 2018

Heh. They really don't care about their base. They know they will vote repug no matter what, so why worry to keep appearances? They have showed their colors with Cheeto in the presidency.