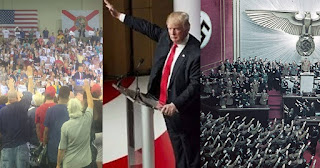 During last week's State of the Union address Donald Trump declared, “I call upon all of us to set aside our differences, to seek out common ground and to summon the unity we need to deliver for the people.” Like almost everything that comes from the man's lips, the statement was a lie. This week, Trump is back to being a prime cause of hate and division as he stated that anyone who does not applaud him is guilty of treason.  Yesterday, his chief of staff, John F. Kelly (who seems to have truly sold his soul), attacked Dreamers accused those who had failed to register for protected status with the federal government of being “too afraid to sign up” or “too lazy to get off their asses.”  Kelly's remarks were in keeping with his furthering of Trump's racist agenda.  Trump's accusations of treason show an even more sinister movement in the Trump/Pence regime: any criticism and exercise of one's First Amendment rights is to be attacked and condemned.  One would think we were living in Hitler's Germany or Putin's Russia.  A column the New York Times looks at this disturbing demagoguery.  Here are excerpts:

I’m now told that I have betrayed my country and committed the ultimate crime.  I did not clap during President Trump’s State of the Union address.

But even if could, I wouldn’t have. That’s not because I’m rooting against America. It’s because I’m rooting for it — and believe that we deserve better than a leader who uses language as sloppily and poisonously as Trump does, who reacts to every unwelcome message by smearing the messenger, and whose litmus test for patriotism is this and this alone: Do you worship me? On Monday afternoon he visited a manufacturing plant outside Cincinnati, where of course he complimented himself, lavishly. . . . But something that he said stood out, not just because it went so ludicrously far, even by Trumpian standards, but because it so perfectly captured his distinctive madness and meanness. Recalling that many Democrats sat on their hands for much or all of his speech before Congress last week, he pronounced them “un-American,” adding: “Somebody said ‘treasonous.’ I mean, yeah, I guess, why not? Can we call that treason? Why not? I mean, they certainly didn’t seem to love our country very much.”

My favorite touch is the “somebody.” With Trump, the darkest and most conspiratorial notions are never his doing or responsibility. He heard it somewhere. He read it someplace.

That meandering air masks a considered ploy: As a distraction and deflection, he routinely accuses his adversaries of the very wrongdoing that can more credibly be attributed to him. “Treason” is a word too grand to be thrown around casually, but it applies better to a president who minimizes and denigrates clear evidence that a foreign power meddled in an American election — and makes no real effort to prevent that from happening again — than it does to a bunch of lawmakers who decline to salute him. Their actions are largely theatrical. His are substantively dangerous. Democrats, he said, were “selfish,” putting their own feelings above the country’s welfare. The man who signed tax legislation that benefits his business empire and spends roughly one of every three days at a Trump-branded property wouldn’t know anything about that. If journalists are documenting his falsehoods, they themselves must be fabulists. If judges rule against him, they must be biased. If federal law enforcement officials have suspicions about him or people who worked for him, they must be corrupt hacks. If Democrats don’t congratulate him for making America great again, they must be traitors.

Soon there is no one to trust but Trump, or no one to trust at all. That’s the point. He’s inoculating himself, and no price — not the reputations of individuals who have behaved honorably, not the viability of institutions that are crucial to the health of our democracy — is too steep to pay.

[I]f you accept his loose definition of treason, hasn’t he committed it? I’m not referring to Russia; I’m referring to his effort to delegitimize President Barack Obama by insisting, with no evidence, that he was born outside the United States. That’s infinitely more defiant and destabilizing than Nancy Pelosi’s inert hands and anguished mien as Trump delivered his big speech. I think it’s more patriotic to withhold applause than to grant it too readily.


I will never applaud the man.  I view him as a toxic poison that needs to be purged from the American landscape - the sooner the better given the harm that he is doing to American institutions and the hatred that he is fanning.
Posted by Michael-in-Norfolk at Wednesday, February 07, 2018