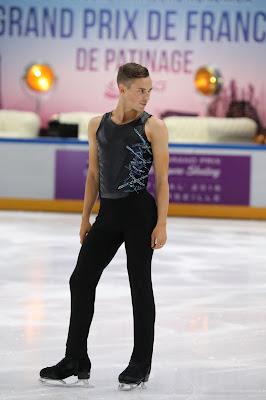 Mike Pence has a very long and well documented history of being an enemy of LGBT individuals.  Indeed, some believe he is the moving force behind the Trump/Pence regime's efforts to rescind every LGBT friendly policy of the Obama administration and the Sessions Justice Department's argument that existing civil rights laws do not protect LGBT individuals.  And then there is Pence's history of supporting totally debunked "gay conversion therapy" - something some rumors whisper that Pence under went himself (the most anti-gay Republicans seemingly are always self-loathing closet cases).  Not surprisingly, openly gay Olympic figure skater Adam Rippon said he had no interest in meeting with Pence who he rightly sees as an enemy of LGBT rights.  This ticked off Pence who sought to meet with Rippon who again said "No."  In my view, Rippon did the right thing.  Pence is not susceptible to having his heart and mind changed and any such meeting would merely be spun by Pence for PR purposes to depict him as open minded, something that he is not. USA Today looks at the situation.  Here are highlights:


PYEONGCHANG, South Korea – Vice President Pence is set to arrive here soon to lead the official U.S. delegation to the 2018 Winter Olympic opening ceremony. . . . But on the afternoon on Jan. 17, Pence had another focus: He was so concerned about the criticism he received from U.S. Olympic figure skater Adam Rippon that his staff went to the extraordinary length of asking the U.S. Olympic Committee to set up a conversation between the two – an offer Rippon turned down.

[A] member of Pence’s staff requested the conversation with the openly gay Rippon after reading the skater’s derogatory remarks about him in a USA TODAY Sports story that had been published online just an hour earlier.  Rippon, the two people said, declined the invitation.

The spat between the vice president and the figure skater began when I asked Rippon last month about Pence’s selection for the ceremonial role of leading the U.S. delegation to the Olympic opening ceremony.

The comments from Rippon about gay conversion therapy that so riled Pence come from a widespread belief stemming from a statement Pence made in 2000 on his congressional campaign website: “Resources should be directed toward those institutions which provide assistance to those seeking to change their sexual behavior.”

While Pence didn’t explicitly mention gay conversion therapy, leaders in the LGBT community have said they believe that’s exactly what Pence meant in light of his long-standing opposition to gay rights.

Rippon, who said he was bullied and teased as a boy growing up in Scranton, Pa., came out publicly as being gay in an October 2015 story in Skating magazine. He often talks about how he hopes his story can help others, especially young people who might be struggling with their sexuality.

Always outspoken, Rippon said recently he will not go to the White House for a post-Olympic celebration hosted by President Trump: “I said no.” Legendary skier Lindsey Vonn has also said she will not attend.

Posted by Michael-in-Norfolk at Thursday, February 08, 2018