The Fraudulence of the GOP "Fiscal Conservatives" 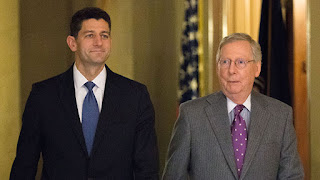 One of the excuses that some "friends" and neighbors give for voting Republican is that they believe in "fiscal conservatism."  Apparently, it's more palatable to them than admitting that they are racists, right wing Christian extremists, and/or homophobes or some combination of the foregoing.  How these folks will try to cling to that disingenuous excuse will be interesting now that Republicans have greatly increased America's budget deficit through a combination of the Trump/GOP tax cuts and the budget passed in the early hours of Friday morning.  Of course, that doesn't even include the fact that since Reagan forward, budget deficits balloon under Republicans and shrink in relative terms under Democrats. A column in the New York Times looks at the utter lie that the GOP is the party of fiscal conservatism.  Here are highlights:

In 2011, House Republicans, led by Paul Ryan, issued a report full of dire warnings about the dangers of budget deficits. “The United States is facing a crushing burden of debt,” it declared, warning of a looming fiscal crisis that might soon “capsize” the economy. Citing the horrors of big deficits, Republicans refused to raise the federal debt ceiling, threatening to create financial turmoil and effectively blackmailing President Barack Obama into cutting spending on domestic programs.

How big were these horrifying deficits? In the 2012 fiscal year the federal deficit was $1.09 trillion. Much of this deficit, however, was a direct result of a depressed economy, which held down revenues and increased outlays on unemployment benefits and other safety-net programs. The deficit fell rapidly over the next few years as the economy recovered.

This week Republicans, having just enacted a huge tax cut, cheerfully agreed to a budget deal that, according to independent experts, will push next year’s deficit up to around $1.15 trillion — bigger than in 2012.Wait, it gets worse. In 2012 there were strong economic reasons to run budget deficits. The economy was still suffering the aftereffects of the 2008 financial crisis. Unemployment was around 8 percent. And the Federal Reserve, which normally takes the lead in fighting slumps, had very limited ammunition . . . . The state of the economy in 2012 was exactly the kind of situation in which running budget deficits is actually a good thing, because they help sustain overall spending. By contrast, there is no comparable case for deficits now, with the economy near full employment and the Fed raising interest rates to head off potential inflation.If anything, we should be using this time of relatively full employment to pay down debt, or at least reduce it relative to G.D.P. “The boom, not the slump, is the time for austerity at the Treasury,” wrote John Maynard Keynes. But Republicans have turned that sage advice on its head.[L]et’s be serious: Their [the GOP's] views haven’t changed at all. They never really cared about debt and deficits; it was a fraud all along. All that has changed is the fact that a Republican now sits in the White House.How do we know Republicans were never sincere about the deficit? It was obvious, even at the time, to anyone who looked at their fiscal proposals. These proposals always involved giant tax cuts for the wealthy — funny how that worked — offset by savage cuts in social benefits. Even so, assertions that deficits would go down depended entirely on assuming lots of revenue from closing unspecified loopholes and huge savings from cutting unspecified government programs. In other words, even at the peak of their deficit-hawk posturing, all Republicans really had to offer was redistribution from the poor to the rich.However, pretending to care about the deficit served several useful political purposes. It was a way to push for cuts in social programs. It was also a way to hobble Obama’s presidency.

And I don’t think it’s unfair to suggest that there was an element of deliberate economic sabotage. . . . . Now Obama is gone, and suddenly deficits don’t matter.

But let me not just bash Republicans. Let me also bash their enablers — all those who were duped into believing their claims to be deficit hawks, or pretended to believe them in order to appear balanced and bipartisan. Such people did America a great disservice.

And they will continue to do a great disservice if they obscure what’s happening now. . . . this is all about Republican bad faith. Everything they said about budgets, every step of the way, was fraudulent. And nobody should believe anything they say now.


Posted by Michael-in-Norfolk at Saturday, February 10, 2018