When Will the GOP Silence Nunes? 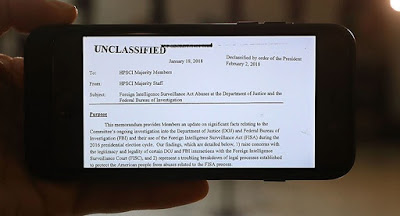 I increasingly find it to be an embarrassment to admit that I was ever a Republican much less an activist and City Committee member for eight years.  Now, with the release of the Nunes memo - a piece of trash if there ever was one - in addition to being controlled by religious extremist and white supremacists, the Republican Party is being led by a mixture of the Three Stooges and a malignant narcissist.  My Republican ancestors would be both sickened and appalled and I feel most confident that they would all be active Democrats were they living today.  Indeed, John McCain's selection of Sarah Palin - the idiot of Wasilla - as his running mate was the last straw for my late mother (she referred to Palin as "that woman").  What's frightening is that the Republican Party of 2008 looks down right sane and normal compared to the insane asylum the Party has become.  In a column in the Washington Post, conservative columnist Jennifer Rubin and one time GOP apologist ask the question of if and when someone in the Republican Party is going to act to stop the insanity and damage being done to the nation.  Here are column highlights:

With his memo, House Intelligence Committee Chairman Devin Nunes (R-Calif.) botched for a second time (remember the unmasking scandal) an attempt to discredit the intelligence community to protect President Trump in the Russia investigation. For a second time he resorted to a specious and factually defective non-scandal, hoping to play to the Trump cultists and their state TV channel, Fox News. Nunes is exceedingly terrible at this game. For example:

·        He managed to prove the dossier was not the basis of the Russia investigation; George Papadopoulos was.
·        He underscored that one couldn’t possibly “spy” on the Trump campaign by getting a FISA warrant, which was kept secret during the campaign, on Carter Page — who already had left the campaign at the time the warrant was sought.·        He did not attempt to tie the FISA warrant to special counsel Robert S. Mueller III or to explain how the FISA court approved the warrant and its three extensions (which required a showing of progress in the investigation).
·        He misstated former director James B. Comey’s remarks about the dossier.
·    He underscored that at four different points, the FISA court thought there was probable cause to conduct surveillance of Page, thereby establishing that a suspected Russian agent had in fact worked on the campaign.

Nunes’s memo was so flimsy that even White House Chief of Staff John F. Kelly told Trump it was a bust. The Post reports that Kelly told Trump that “the document was not as compelling as some of its advocates had promised Trump.” Oops.House Oversight Committee Chairman Trey Gowdy (R-S.C.) — who spent endless time on the Benghazi investigation — was the only one on the Intelligence Committee to see the underlying intelligence. He gave Nunes’s effort a failing grade. “As I have said repeatedly, I also remain 100 percent confident in Special Counsel Robert Mueller,” he tweeted. “The contents of this memo do not – in any way – discredit his investigation.” Senate Armed Services Committee Chairman John McCain (R-Ariz.) released a statement blasting both the House and the president. It was interesting who preferred to keep as far from Nunes’s calamity as possible  — Trump loyalist Sen. Tom Cotton (R-Ark.), for example, as well as Director of National Intelligence Dan Coats and CIA Director Mike Pompeo.Meanwhile, ranking Democrat Adam Schiff (D-Calif.) and other Intelligence Committee Democrats released a persuasive rebuttal to Nunes’s botched memo and declared they would again demand a vote to release their own memo (referencing classified material) publicly.

The memo was a disaster not only for the Trump-Nunes strategy but also for the country. A raft of national security experts eviscerated the memo and castigated Nunes for wrecking the oversight process. The Lawfare blog explained: “The bottom line is that there are multiple reasons to expect that Nunes has not given a full and fair account of the FBI’s FISA process and that his memo is as factually deficient as it accuses the Carter Page warrant application of being.” They conclude, “At the end of the day, the most important aspect of the #memo is probably not its contents but the fact that it was written and released at all. Its preparation and public dissemination represent a profound betrayal of the central premise of the intelligence oversight system.”The only questions that remain are how long House Speaker Paul D. Ryan (R-Wis.) is going to let this humiliating spectacle go on and how much damage he will permit to be done to the oversight process so Nunes can flail about trying to protect Trump and ruin public servants’ reputations. . . . . Mr. Speaker, haven’t you all done quite enough damage?


A lengthy piece in Politico similarly slams the Nunes memo: one can only conclude that the Nunes memo fails to make its case—and fails quite badly at that.
Posted by Michael-in-Norfolk at Sunday, February 04, 2018