If More LGBT People Had Voted, Hillary Would Be President 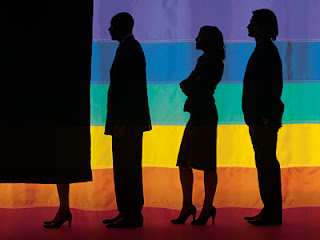 I continually find it utterly mind numbing that a considerable percentage of LGBT individuals - the same goes for other minorities targeted by Republican policies - fail to register to vote and get themselves to the polls on election day or fail to vote via an absentee ballot.  With the GOP and its Christofascist and white supremacist base posing an existential threat of LGBT and minority rights, it is tantamount to a slow moving form of suicide to not register and vote.  New analysis suggests that had more LGBT citizens registered to vote and gone to the polls and cast votes against anti-LGBT Republicans, Hillary Clinton would be in the White House now and the LGBT community would not be facing an all out war against our civil rights. Of course, more Millennials getting registered to vote and voting against GOP policies harmful to their long term future could also have prevented the current national nightmare.  A piece in LGBT Nation looks at how the Trump/Pence scurge on America might have been avoided. Here are article excerpts:

Trevor Burgess was the first out gay man to lead a publicly traded bank in the United States. Now he’s turning his attention to a different numbers game.

Burgess has launched a digital voter registration platform for the LGBTQ community in a bid to increase the community’s involvement in the political arena. While big money organizations regularly endorse and stump for their chosen candidates, the real power is in the ballot box and getting people there to cast their votes.

“We’ve seen it time and time again, one vote can make all the difference. Our community has a duty to the next generation to make sure we are heard at the ballot box,” Burgess said in an emailed statement.

The #QTHEVOTE initiative aims to register as many queer voters as possible before the 2018 midterm elections.

Burgess points out that while Hillary Clinton won the popular vote in the last presidential election, her small losses in five states tipped the balance in favor of Donald Trump. With the results amounting to less than 1.5% of the vote in each state, the #QTHEVOTE initiative estimates that there were more unregistered LGBT voters in each state than the amount of votes that cost Clinton the election.“It’s simple math, analyzing data from Gallup and Project Vote, if every LGBT American had voted in 2016 we would not have our fundamental rights under attack today,” Burgess said. “We can and should be the most powerful and passionate voters in America.”

In Michigan alone, for example, Clinton lost by 13,000 votes but the group estimates there are over 87,000 unregistered LGBT voters.

The group will target potential voters through social media, online advertising and partnerships with other organizations.

The laziness and irresponsibility of  a minority is harming the entire LGBT community.  And as for gays who vote Republican, in my view it is long past time that they let go of their internalized homophobia, racism, and/or greed and stop voting against their own interests and those of our community.  They need to remember that there were wealthy and influential Jews in 1930's Germany that thought they were safe from the Nazi regime.  History proved them wrong and it cost many of them their lives.  No sane LGBT American, in my view, should ever vote Republican given the current toxic and hate driven nature of the GOP.   For those who don't like this assessment, I'm sorry, but you need to get your head out of your ass.
Posted by Michael-in-Norfolk at Sunday, February 04, 2018