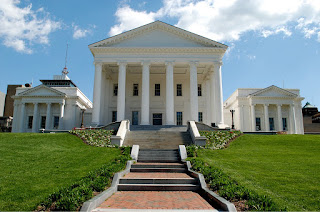 Recently at a post funeral reception for a long time friend I encountered someone I had known well back in my days of a Republican activist.  We spoke and the individual at one point asked what it would take to get me back in the Republican Party.  Not wanting to be disruptive, I said that for now I preferred no not be officially a member of either party - which is technically true even though all my efforts over the last 18+ years have been working for Democrats. Meanwhile, I thought to myself that short of extended torture or some unlikely total transformation of the GOP (which would at a minimum have to include a complete expulsion of the Christofascists and a total denunciation of all things Trump), I'd never be an active Republican again.  My former GOP colleague is not a bad person, but sadly is so immersed in the right wing news bubble and social activities centering on Republican women's' clubs that she is blind to what the GOP has become.  On Thursday, LBGT Virginians were dealt a vivid reminder that today's GOP is all about hate and bigotry.  A cabal of five Republicans - two from Hampton Roads: Barry Knight and Jason Miyares - killed every pro-LGBT bill in the Virginia General Assembly.  They were able to do so thanks to the gerrymandered districts that still dominate in Virginia. No Republican has won statewide office in Virginia in nearly a decade, yet Republicans continue to hold small majorities in the Virginia Senate and House of Delegates which allows them to control committees and kill progressive legislation.  An op-ed in GayRVA looks at the disturbing reality and reminds us that LGBT Virginians and progressives need to be more organized and engaged than ever.  Here are highlights:

Remember all those pro-LGBTQ bills that got introduced back at the beginning of this year’s General Assembly session? Almost all of them are dead now. In the last 24 hours, no less than four bills were killed in House Of Delegates subcommittees. What the hell is going on here?

At the beginning of this session, we were all riding a wave of positive energy. Democrat Ralph Northam won a 9-point victory over his Republican opponent, Ed Gillespie, to take the office of Virginia Governor with a clear mandate. The huge swing in the General Assembly further underlined this mandate, with a 32-seat Republican advantage being erased as a dozen or so Republican incumbents were defeated by Democratic challengers. Suddenly, things were almost equal, with both houses of the Genera Assembly under Republican control by a one-vote margin in each.

So what happened? In as few words as possible: the House Of Delegates happened. In spite of all the potential progress we were poised to achieve as a community, bills intended to ensure several important facets of LGBTQ civil rights were defeated at the subcommittee level, with less than a fifth of the House shutting them down before anyone else ever got to vote on them.

These aren’t just minor things, either. Five different bills and resolutions intended to cover sexual orientation and gender identity under state hate crimes statutes. . . . . A variety of bills, including Del. Mark Levine’s very wide-ranging HB 401, attempted to finally prohibit discrimination against LGBTQ people in employment, housing, and a variety of other situations. Even 30th District Senator Adam Ebbin’s SB 202, which strove merely to make a permanent law of the protections for LGBTQ state employees that have been enacted through Executive Orders by the last two governors, was shot down in subcommittee in the House of Delegates — after it had already passed through the entire Senate.

In the end, this all comes down to gerrymandering, which, it appears, might be the most important LGBTQ issue of all here in Virginia. Back at the beginning of the week, at Equality Virginia’s Day Of Action, we heard from 69th District Delegate Betsy Carr about how important an issue gerrymandering is to her, and the House Resolution she’d proposed to reduce gerrymandering. At the end of the week, with all three of the bills Equality Virginia was there to talk about dead, the fact that her anti-gerrymandering resolution is still alive as yet can offer us what might be a tiny scrap of hope.

But regardless, something needs to change — something big. After a Democratic governor swept into office on a 9-point victory mandate, and over a dozen seats in the House of Delegates flipped to Democratic control, the fact that LGBTQ rights are still treated as a non-issue by our state’s legislature is reason for the joy we felt at the beginning of this session to turn to righteous fury. Maybe it’s time for a lawsuit of our own against the Virginia State Board of Elections.

[A]ll of us have representatives who need to hear a whole lot more about this. It’s our responsibility to blow these people up, to make them listen to our needs and let them know that we won’t take this sort of injustice lying down. Call your US Senator, call your Congressperson, call the governor — call somebody. You can find contact info for your US representatives at https://www.govtrack.us/congress/members. Do it. Give ‘em hell.