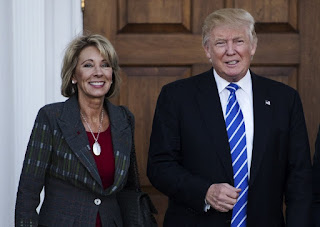 With Republicans pushing for "bathroom bills" and "religious freedom laws" - better described as special right to discriminate laws - and Secretary of Education Betsy DeVos wanting to "bring God back into the classroom," the atmosphere for LGBT children and youths could quickly become toxic. And then there is racist and homophobic Jeff Sessions' reversal of Justice Department support for the protection of LGBT youth under existing laws that would grant protection against discrimination due to sexual orientation and/or gender identity.  It is a troubling situation, especially given the higher drop out and suicide rate for LGBT youth, not because of their sexuality or gender identity per se, but because of the mistreatment and abuse the "godly folk" and their off spring believe they have the right to inflict upon them.  Indeed, Betsy DeVos' family has given millions of dollars to groups that seek to guaranty the continued right to abuse and bully LGBT students and obstruct efforts to protect them.  A piece in The Advocate looks at the problem and proposes some solutions that may be difficult to achieve given the anti-LGBT agenda being pushed by the Trump/Pence regime.  Here are excerpts:

Physical and verbal bullying of LGBTQ students is commonplace. In a representative sample of eighth-graders in Washington State, 14 percent of boys and 11 percent of girls reported being bullied because of their perceived sexual orientation in the past 30 days alone. LGBTQ students are two to three times more likely than their peers to be physically assaulted or threatened at school.

Students who experience anti-LGBTQ bullying are significantly more likely to report depression and suicide attempts, skipping school, poorer school performance, and dropping out of school. Victims of anti-LGBTQ bullying tend to fare worse than students bullied for other reasons, perhaps due to the ways that hate-related victimization reinforces existing perceptions of hostility (e.g., hearing homophobic comments at school).

Even within this scenario, Orwellian equality rears its head. While research shows many LGBTQ students are victimized, some are more likely to be than others. Transgender youth and youth with unique gender expressions are at a higher risk for bullying, as are those in rural or impoverished communities and those who attend schools without gay-straight alliances.

As LGBTQ individuals come out earlier than before, it’s becoming even more pressing for schools to create a safe environment for their students.

Action is urgently needed to address the hostile environment that LGBTQ youth face at school and its effects on school engagement, mental health, and long-term opportunities. Our study points to three potential strategies that could help to address these issues:

• Competency and advocacy training for school psychologists and teachers — who generally report supportive attitudes toward LGBTQ students but lack the knowledge and skills to advocate for them — could help create more supportive, less hostile climates in schools.

• Fostering the development of gay-straight alliances in schools, which seem to offer some protection against school-based victimization risk, is another promising approach. Although secondary schools are not permitted to ban gay-straight alliances if they allow other extracurricular groups (per the Federal Equal Access Act of 1984), school principals still commonly take measures to exclude them (American Civil Liberties Union, 2015). Such discriminatory practices must be addressed and replaced with active support for groups and services that make schools safer.

• Increasing resources to respond to victims of anti-LGBTQ bullying, particularly to prevent suicide and school dropout. Affirming and culturally responsive services for LGBTQ bullying victims are critical, particularly given the fact that help-seeking often requires LGBTQ students to disclose not only the stigmatized experience of bullying and victimization, but also a stigmatized gender or sexual identity to school counselors or other professionals.

While I was not "out" in high school - I remained closeted for over two decades after I graduated - I recall some of the bullying and harassment I received.  No student should ever be place in a situation where thoughts of suicide are ever present and suicide seems to be the only means of escape.  I experienced this first hand.
Posted by Michael-in-Norfolk at Thursday, May 25, 2017