New Trump Budget Hits His Own Voters and the Poor Hardest 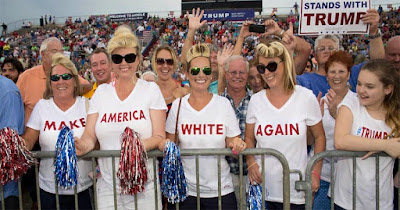 The proposed Trump/Pence regime budget released today follows through on past GOP priorities: massive cuts to social safety net programs such as food stamps, aid for the disabled, and the working poor while granting huge (obscene might be the more appropriate word) tax cuts to the wealthiest Americans.   Stated another way, Trump wants the wealthy to enjoy an even more self-centered and opulent life style while the poor and poorly paid working class citizens are literally left to die.   It is the antithesis of the Gospel message that Republicans and the pathological liar who goes by the name of Donald Trump falsely claim to honor.  And it is critical to remember that this is the agenda that 81% of evangelical Christians voted for.  The lies, hypocrisy and moral bankruptcy are all off the charts.  I cannot help but ask: where are the supposedly "good Christians"?  Why don't we see them loudly opposing, protesting and denouncing these budget cuts?   Lastly, why don't we see Trump voters opening their eyes and realizing that they have been played for fools and been betrayed?  They feel like lemmings to Trumps call to racism and white supremacy.  A piece in Politico looks at this reprehensible proposed budget.  Here are article highlights:

Donald Trump, whose populist message and promises to help American workers propelled him to the White House, issued a budget proposal on Tuesday that instead takes aim at the social safety net on which many of his supporters rely.

Rather than breaking with Washington precedent, Trump’s spending blueprint follows established conservative orthodoxy, cutting taxes on the wealthy, boosting defense spending and taking a hatchet to programs for the poor and disabled – potentially hurting many of the rural and low-income Americans who voted him into office.

The president’s budget plan calls for more than $1 trillion in cuts to a wide range of social programs with millions of beneficiaries, from farm subsidies to federal student aid. That includes a $600 billion cut to Medicaid over 10 years, despite Trump’s repeated promises on the campaign trail not to cut the program. The budget also takes an ax to the federal food stamp program and Social Security Disability Insurance.

Trump also proposes some of the deepest cuts to agriculture subsidies since Ronald Reagan, squeezing out nearly $50 billion over 10 years.

Trump’s budget would drastically cut domestic programs controlled by Congress, slashing $1.7 trillion over 10 years. At the end of the decade, the U.S. would spend nearly twice as much on defense as on other domestic programs. Domestic discretionary spending would be capped at $429 billion per year, below 2004 levels, while military spending soars to $722 billion.

There’s a certain philosophy wrapped up in the budget and that is — we are no longer going to measure compassion by the number of programs or the number of people on those programs,” White House Office of Management and Budget Director Mick Mulvaney, one of the budget’s chief architects, told reporters on Monday.

Mulvaney rejected accusations that Trump’s budget unfairly targets the poor, arguing instead that it amounts to a broad rethink of the country’s welfare system.  “We need folks to work. We need people to go to work. If you’re on food stamps, and you're able-bodied, we need you to go to work. If you’re on disability insurance and you're not supposed to be, we need you to work,” he added.  . . . . Mulvaney said the budget does not touch “mainline” or “core” Social Security, but it does cut Social Security’s disability insurance.

Trump’s budget would tighten the belt on programs for low-income families ranging from cash assistance to the child tax credit. Nearly $200 billion in cuts will come directly from the federal food stamp program, which helps feed 44 million people each year.

Trump would also slash $72 billion by tightening the rules for programs for people with disabilities — programs that Trump’s advisers have described as riddled with fraud and abuse.
Democrats vowed on Tuesday to ensure that the GOP pays a political price for the massive social safety-net cuts in Trump's budget, regardless of whether Congress follows through on enacting them.
“If I’m a Republican member of the House, do you really think I’m looking forward to going home to whatever state I came from to say, ‘Yeah, I just voted for incredibly large tax breaks for billionaires. Oh, by the way, we’re going to cut Head Start and child care and after-school programs and health care and education’?" Bernie Sanders, the senior Democrat on the Senate Budget Committee, asked reporters.
“I’m deeply concerned about the severity of the domestic cuts,” Rep. Hal Rogers (R-Ky.), a long-time member of the powerful House Appropriations Committee, told POLITICO on Friday.
Rogers has been an outspoken critic of Trump’s proposed cuts to programs that benefit rural regions like his home state, like the Appalachian Regional Commission.
“I think we do need healthcare reform. I think we do need welfare reform. But the kinds of reductions that he’s talking about go exactly against the states that brought [Trump] to the dance, so to speak,” said G. William Hoagland, a former long-time Republican Senate budget aide.