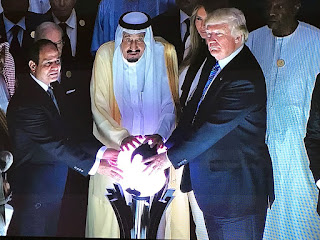 Donald Trump and his fellow Republicans like to depict every Muslim as a would be extremist and terrorist.  Meanwhile, back home in America Trump and the GOP in general prostitute themselves to Christian extremists every bit as consumed by hatred of those who are different and who reject their Medieval beliefs as are the "radical Islamic extremist: that Trump and the GOP so love to condemn.  I have no love for Islamic terrorists, but if we are going to condemn religious extremism and religious based hatred, then ALL faiths that spread hatred ought to be cited and moderates of those faiths should be called upon to drive out and discredit the extremists.  New York Magazine looks at Der Trumpenführer's comments to Muslim leaders that ought to be applied her at home to the majority of evangelical Christians and virtually every "family values" group that preaches hatred and division.  Here are article highlights:

President Donald Trump delivered his first major speech on the world stage in Saudi Arabia on Sunday, a rallying cry to leaders in the Muslim world “to take the lead in combating radicalization.”

“We must be united in pursuing the one goal that transcends every other consideration,” Trump said to the more than 50 leaders gathered in the opulently decorated room. “That goal is to meet history’s great test — to conquer extremism and vanquish the forces of terrorism.”

Trump did not use the phrase “radical Islamic terrorism” in his address – though he had repeatedly accused Obama of failing to use that phrase during the campaign. In what did seem like a jab to the previous administration, Trump promised that the United States was not here to “lecture,” but to offer its partnership in combatting the scourge of extremist ideology and terrorism. And yet, Trump issued his own demands: . . . . A better future is only possible if your nations drive out the terrorists and extremists. Drive. Them. Out.”

Trump was mostly short on strategy to “defeat terrorism and send its wicked ideology into oblivion,” though he called on Muslim countries to deny “territory to foot soldiers of evil” and access to funds. To this end, Trump announced two broad initiatives: the creation of the “groundbreaking” Global Center for Combating Extremist Ideology, to be based in Saudi Arabia, and, later, an agreement to form a Terrorist Financing Targeting Center that would be co-chaired by the United States and Saudi Arabia and include the six countries in the Gulf Cooperation Council.

Trump also used his platform to condemn Iran, a direct denunciation that was eagerly welcomed by the president’s Saudi hosts, who considered Obama’s approach toward their regional enemy too conciliatory. . . . . Trump also criticized Iran for its “destabilizing interventions in of Syria,” though he noticeably failed to mention the other key destabilizing force: Russia.

Pretty words but likely disingenuous and filled with hypocrisy.  Trump preaches to Muslim leaders yet the GOP allowed its platform to be drafted by Christian extremists some of who have documented ties to white supremacy groups.  Trump ought to practice at home what he preaches abroad.  The Christofascists should be treated in the identical manner Trump wants Islamic extremists.  Both groups are a blight on human kind.  Oh, and did I mention that Saudi Arabia is the number one financial backer of Islamic fundamentalism and the terror it breads.
Posted by Michael-in-Norfolk at Sunday, May 21, 2017