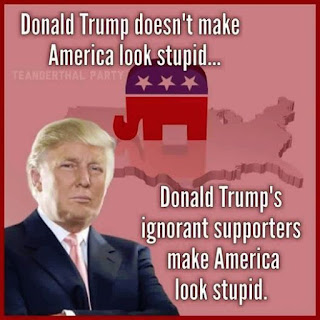 One thing that strikes me about Trump supporters in the current circumstances is the effort they make to remain ignorant of the seriousness of the scandals swirling around their amoral and unfit president. Of course, Fox News. Breitbart and other conservative "news" outlets provide assistance with their censorship of anything inconvenient to maintaining the pretense that the Trump/Pence regime is performing well rather be honest and let their viewers/listeners learn the reality that the regime is a train wreck perhaps hurtling toward disaster.  This embrace of ignorance is not surprising when it comes to the evangelical Christians who daily reject modernity and science which challenge their fairy tale and myth based beliefs.  For others, presumably bigotry and a need to maintain a belief that they are superior to others justifies ignoring anything that might ruffle their false sense of superiority or outmoded world view.  A piece in Vox looks at this conscious effort to ignore the truth while labeling inconvenient facts as "fake news.:  Here are excerpts:

Objectively, Donald Trump’s presidency is flailing. Regardless of what you feel about his core politics and policy, the Trump administration is caught in a cycle of scandals of its own creation. Trump fired FBI Director James Comey, with the possible intent of quashing an FBI probe into his campaign. He gave away intelligence secrets to the Russians, potentially endangering a foreign agent embedded with ISIS.

The start of the Trump administration has been riddled with more scandals than any presidency of recent memory. And yet Trump still enjoys high support among his base: 85 percent of Trump voters approve of the job he’s doing, a recent Morning Consult poll found.

If you’re looking for an explanation for why Trump’s support is so solid among his base — and why it will remain so stubbornly high — read this piece by the Associated Press, where the reporters asked Trump supporters how they’re handling the wave of scandals.

“I tuned it out,” Michele Velardi, a 44-year-old in Staten Island, told the AP of the recent news. “I didn’t want to be depressed. I don’t want to feel that he’s not doing what he said, so I just choose to not listen.”

This line is extremely revealing. It shows a psychological tendency we’re all susceptible to. That tendency is called “motivated ignorance,” and it’s an extremely powerful force in American politics.

Here’s a simple truth: We find inconvenient political facts to be genuinely unpleasant. Psychologists theorize that’s because our partisan identities get mixed up with our personal identities — which would mean that an attack on our strongly held beliefs is an attack on the self.

This “fundamental need for a shared reality with other people” all too often overshadows incentives to weigh evidence or to be objective when it comes to political discussions.

This is the dark truth that lies at the heart of all partisan politics. We automatically have an easier time remembering information that fits our worldviews. We’re simply quicker to recognize information that confirms what we already know, which makes us blind to facts that discount it.

Velardi, the Trump supporter in the AP story, avoided the news by averting her eyes (and ears). But if you’re a regular consumer of conservative media, you don’t have to.

Vox’s Alvin Chang tracked how conservative news sites have been covering the recent Trump controversies. And they largely have been avoiding the topic or obscuring the details.

“Even amid some of the most troubling presidential news in decades, a huge portion of this country is having a very different experience of these events, and repeating it over and over,”

This is a key point that many people miss when discussing the “fake news” or “filter bubble” problem in our online media ecosystems. Avoiding facts inconvenient to our worldview isn’t just some passive, unconscious habit we engage in. We do it because we find these facts to be unpleasant. And as long as this experience remains unpleasant, and easy to avoid, we’re just going to drift further and further apart.

These scandals seem likely to keep growing. And new ones may pop up. But know that it will take a lot for Trump’s supporters to abandon him.