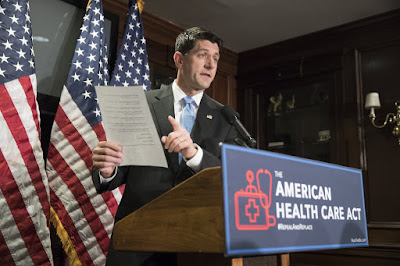 Remember all the bloviating by Paul Ryan and a host of other Republicans - including Der Trumpenführer about how the American Health Care Act, a/k/a Trumpcare or Ryancare depending on your inclination to lay blame, would lower costs and expand coverage?  Well, the non-partisan Congressional Budget Office scoring released today underscores the magnitude of the lies uttered by these individuals.  The CBO says that Trumpcare would cause 23 million Americans to lose healthcare coverage.  As for the promise of lower premium costs and "quality coverage," that too is a lie.   Older Americans in particular would be severely hard hit as would those with seriosus healthcare issues. Indeed, a senior advisor at the Center on Budget and Policy Priorities, said that the major takeaway from the CBO score is that Republicans’ talking points simply do not hold up.  That is a polite way of saying that Republicans are lying.  For Republicans, apparently the Commandment against lying has been excised from the Ten Commandments.  Candidly, the only beneficiaries of Trumpcare are the wealthy who would enjoy a huge tax break.  First these excerpts from the New York Times:

A bill to dismantle the Affordable Care Act that narrowly passed the House this month would increase the projected number of people without health insurance by 14 million next year and by 23 million in 2026, the Congressional Budget Office said Wednesday. That 10-year figure is slightly less than originally estimated.

It would reduce the federal deficit by $119 billion over a decade, less than the $150 billion in savings projected in late March for an earlier version of the bill. And in states that seek waivers from rules mandating essential health coverage, the new law could make insurance economically out of reach for some sick consumers.

“Premiums would vary significantly according to health status and the types of benefits provided, and less healthy people would face extremely high premiums,” the budget office concluded.

The new forecast of the nonpartisan Congressional Budget Office, Capitol Hill’s official scorekeeper, is another blow to Republican efforts to undo President Barack Obama’s signature domestic achievement. The Senate has already said it will make substantial changes to the measure passed by the House, but even Senator Mitch McConnell of Kentucky, the majority leader, is sounding uncertain about his chances of finding a majority to repeal and replace the health law.

The report provided fresh ammunition for Democrats trying to kill the repeal bill, which they have derided as “Trumpcare.”

Democrats say much of that instability [of the Affordable Health Care Act] stems from Republican efforts to repeal and undermine the Affordable Care Act. The Senate minority leader, Chuck Schumer of New York, harshly criticized House Republicans for voting on their revised repeal measure without an updated analysis from the budget office.

Under the House bill, states could opt out of certain provisions of the health care law, including one that requires insurers to provide a minimum set of health benefits and another that prohibits them from charging higher premiums based on a person’s health status.


Think Progress was even more unkind.  Here are highlights:

Jacob Leibenluft, senior advisor at the Center on Budget and Policy Priorities, said that the major takeaway from the CBO score is that Republicans’ talking points don’t hold up. AHCA supporters still claim that the waivers wouldn’t harm anyone who needed essential health benefits or anyone with preexisting conditions, but this bill doesn’t bear that out.

“What the changes of bills have effectively done is resulted in system where sicker and older people are even worse off in terms of how much they would pay and quality of insurance coverage they would get.” Leibenluft said. Those changes would do little to boost overall coverage numbers, either.

“I think what that points to is how deeply unfixable the basic structure is. The problem is they’re pursuing hundreds of billions in tax cuts in a bill that needs to reduce deficit and that requires deep cuts to health coverage. And it’s not possible to undo those cuts to coverage while maintaining that basic structure.”