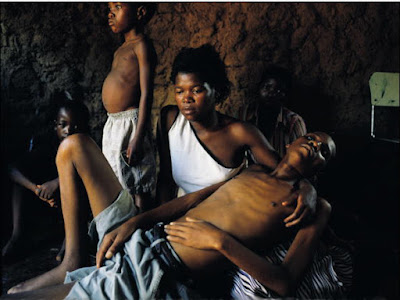 There are two groups that the 81% of evangelical Christians who voted for Donald Trump, a/k/a Der Trumpenführer, hate just as fervently as Hispanic immigrants: gays and blacks.  If one looks, beneath the veneer of most supposedly Christian "family values" groups - think Family Research Council or The Family Foundation here in Virginia - there is a strong white supremacist undercurrent. The anti-gay agenda of these groups is in open view for all to see.  Thus, who would be pleased by drastic cuts in AIDS treatment programs?  The Christofascists and "family values" crowd, of course. And in his proposed budget cuts, Trump appears anxious to please this portion of his base.  The consequences in Africa would be horrific and cost a million lives.  These lost lives would be black individuals, so Trump and his evangelical Christian base seemingly believe this is just fine.  A piece in the New York Times looks at this ugly proposal (Note: funding for contraception - another thing opposed by the Christofascists - would also be slashed) .  Here are story highlights:

At least one million people will die in sub-Saharan Africa and elsewhere, researchers and advocates said on Tuesday, if funding cuts proposed by the Trump administration to global public health programs are enacted.

The United States currently spends more than $6 billion annually on programs that buy antiretroviral drugs for about 11.5 million people worldwide who are infected with H.I.V., the virus that causes AIDS. The Trump administration has proposed slashing those programs by at least $1.1 billion — nearly a fifth of their current funding, said Jen Kates, a vice president at the Kaiser Family Foundation.

“These are lifesaving interventions, and these levels of reductions will significantly curtail service delivery,” Ms. Kates said.

Much of the success of anti-AIDS efforts in Africa has come from a guarantee in many countries that people who test positive for H.I.V. can immediately receive treatment.

With a huge share of Africa’s population reaching sexual maturity in the next four years, the virus could again imperil much of the continent if fewer people are treated, said Brian Honermann, deputy director at amfAR, a foundation that invests in AIDS research.

Much of the United States government’s funding for AIDS treatment and research is funneled through the President’s Emergency Plan for AIDS Relief, or Pepfar, which was established in 2004 by President George W. Bush in an effort to save Africa from an epidemic that threatened to kill much of the population of entire countries, like Botswana and Namibia.

President Barack Obama expanded Pepfar, and combined with the Global Fund and other international efforts, the spending is widely credited with arresting the AIDS epidemic.

The Trump administration has also proposed eliminating $524 million in funding for contraceptives and other family planning efforts that mostly benefit women in developing nations.

It is unclear how many lives could be lost as a direct result of the budget cuts, but the Global Fund estimates that every $100 million invested saves about 133,000 lives. An amfAR calculation found a similar effect, suggesting that the administration’s proposed cuts to AIDS programs alone could cost more than one million lives and orphan more than 300,000 children.

“All of these programs have multiplier effects beyond just those immediately served by them,” said J. Stephen Morrison, who directs global health work at the Center for Strategic and International Studies. “For the first time ever, after 15 years of steady growth, we’re going to see a radical regression that will have huge effects.”

Even George W. Bush - an individual I continue to loath - supported these AIDS programs.  Sadly, since 2009, the GOP and is allegedly Christian base has become increasingly hideous and callous to the lives of others.
Posted by Michael-in-Norfolk at Thursday, May 25, 2017