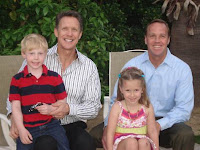 Results of a new study will surely cause angst among the gay-hating professional Christian set and does not bode well long term for those like Maggie Gallagher who are making plush livings disseminating anti-gay marriage untruths. The study finds that gay headed families have grown markedly in acceptance and the split is even now between those who accept such non-traditional families and those who cling to the Christianist mindset of what constitutes a family. Surprisingly, same sex couple headed families were more favorably viewed than single mothers (whom I'm sure the Christianists would like to see stoned to death along with gays if they got pregnant outside of marriage). As the oldest and most bigoted generations in society die off, the numbers should continue to increase in favor of acceptance. Here are some highlights from MSNBC:
*
Highly visible gay families like Pougnet’s may be changing the way Americans view the world. And a new report by the Pew Research Center seems to bear this out. Its nationally representative survey of 2,691 people found that Americans are more accepting of families led by gay and lesbian parents than of single moms.
*
The survey found that when it comes to opinions overall on non-traditional families, such as those with gay and lesbian parents, single mothers, and unmarried parents, the country is split three ways: a third of Americans (dubbed Acceptors by Pew) are comfortable with a wide variety of family situations, a third (Rejectors) consider non-traditional arrangements to be damaging to the country’s social fabric, while the final third (Skeptics) are mixed in their views — approving of some arrangements, but not others.
*
When it comes to families like Pougnet’s, the news is all good. The vast majority of Acceptors and Skeptics believe gay and lesbian families are at least OK — and might even bring something positive to society.
*
While 98 percent of Acceptors think there’s nothing wrong with women raising their children alone, 99 percent of Skeptics and 98 percent of Rejectors believe that’s bad for society. (The survey only asked about single mothers, not single fathers.)
*
Gay and lesbian couples, however, are perceived as better for the kids because they’re providing a two-parent family, says Stamps Mitchell.
*
“There’s no doubt there’s been a shift in attitudes towards gays and lesbians,” says Charlotte Patterson, a professor of psychology at the University of Virginia. “You also see the shift in attitudes towards marriage. Just 15 years ago a Gallup Poll found that 68 percent of Americans said gay marriage should not be legally recognized while 27 percent said it should be. Now the split is 50/50.”
*
One reason for the attitude change may be the increasing contact people have with gays both socially and at work, Patterson says.
*
The media may also have played a big role, says Stamps Mitchell.

“You’re seeing gay families more and more on TV in shows like ‘Modern Family’ and in movies like ‘The Kids are All Right,’” Stamps Mitchell says. “The media does help with acceptance.”
Posted by Michael-in-Norfolk at Wednesday, March 16, 2011