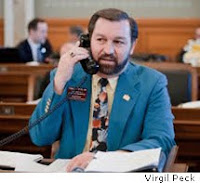 If the horrid rantings of Chuck Pierce examined in the previous post were not disgusting enough, Kansas GOP State Rep. Virgil Peck (pictured at left) has demonstrated the yet an even more extreme fruit of the Christianist/Tea Party/GOP hate fest that has become the norm for the Republican Party. And what is really scary is the fact that Peck probably views himself as an upstanding "godly Christian." So what did Peck propose? He proposed that that hunters could shoot undocumented immigrants like they do with feral pigs in order to control illegal immigration. Clearly, in Peck's book, humans with brown skin and/or Hispanic ancestry are the equivalent of animals. And some people still ask me why I left the GOP years ago? Absent a lobotomy or severe psychological disorder, I don't know how anyone can still be a Republican. Here are highlights from ThinkProgess on Peck's disgusting comments:
*
Today, during a Kansas state House Appropriations Committee hearing on state spending for controlling feral swine, GOP state Rep. Virgil Peck suggested that hunters could shoot undocumented immigrants like they do with pigs in order to control illegal immigration.
*
The Lawrence Journal World reports that Peck refused to apologize for the remark. “I was just speaking like a southeast Kansas person,” he said. The Kansas blog Dome on the Range has the audio clip and direct quote of Peck’s remarks. “It looks like to me if shooting these immigrating feral hogs works maybe we have found a [solution] to our illegal immigration problem,” he said.
*
Listen to the audio clip:
*
Posted by Michael-in-Norfolk at Tuesday, March 15, 2011