The Continuing Nightmare in Japan 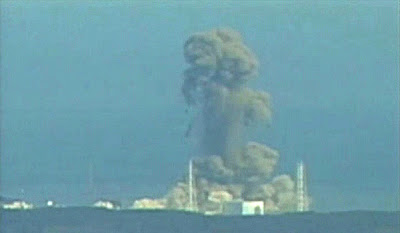 A second explosion has hit the Fukushima nuclear complex about 150 miles north of Tokyo. Meanwhile, the images and increasing death toll coming out of Japan are mind boggling and extremely disturbing. They are certainly a lesson in how little control we often have over our lives and that, indeed "control" is an illusion. A video here shows the onslaught of the tsunami from a street level perspective and under scores how quickly areas were inundated. The threat of nuclear contamination makes matters even more frightening. Here are brief highlights from the BBC:
*
Japanese officials are playing down any health risk, but the US said it had moved one of its aircraft carriers from the area after detecting low-level radiation 100 miles (160km) offshore.
*
Technicians have been battling to cool reactors at the Fukushima Daiichi plant since Friday, following the quake and tsunami. In other developments:
*
Two thousand bodies have been found on the shores of Miyagi prefecture, Japanese media are reporting
*
The government said it would pump 15 trillion yen ($182bn; £113bn) into the economy to prop up markets, but the Nikkei slumped more than 6%
*
Prime Minister Naoto Kan postponed planned rolling powercuts, saying they may not be needed if householders could conserve energy
*
The BBC's Rachel Harvey in the port town of Minamisanriku says everything has been flattened until about 2km inland.
Posted by Michael-in-Norfolk at Monday, March 14, 2011