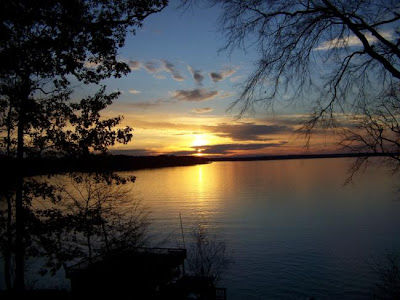 With the Republican assault on environmental protection laws around the nation and in Congress increasing, many are fearful of the possible consequences of lifting a ban on uranium mining in Virginia. A subsidiary of a Canadian company - posing, of course as a "local Virginia company" - wants to conduct mining for uranium ore in the center of the Roanoke River basin which feeds the Kerr Reservoir and Lake Gaston (pictured above) - one of the major water supply sources for the city of Virginia Beach. Proponents claim that the mining would "create jobs" yet leave out the consequences that would ensue if hundreds of thousands of people lost their water supply due to radioactive contamination. Here are highlights from a Virginian Pilot story on the controversy:
*
An environmental group is opposed to a company's proposal to end a 29-year Virginia ban on uranium mining. The Danville-based Roanoke River Basin Association passed a resolution Saturday opposing the ban's lifting, citing a study that concluded mining operations could harm local water supplies.
*
Virginia Uranium Inc. proposes to mine the deposit in Pittsylvania County, near the North Carolina border, and estimates its value at $7 billion to $10 billion. The mine is located in the center of the Roanoke River Basin.
*
About 350,000 North Carolina residents rely on the basin as their water supply . . . The region already supplies 65 million gallons a day to Virginia Beach.
*
Godard cited a study by the city of Virginia Beach that showed the mine could temporarily contaminate the city's water supply if a hurricane or tropical storm causes massive flooding.
*
The study found that Kerr Reservoir upstream of Lake Gaston would trap up to 90 percent of radioactive waste. But the remaining contaminants could enter the lake and that it could take up to two years to completely flush radioactive contaminants downstream.
Posted by Michael-in-Norfolk at Sunday, March 13, 2011