The Harm Caused by "Ex-gay" Cures 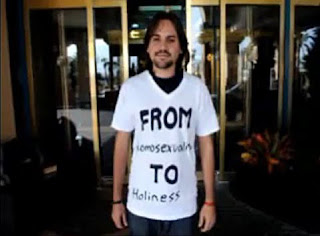 Last week I looked at the continuing politically motivated lies disseminated by and the damage done to those who participate in the APA condemned "ex-gay" ministries. Given that yet another whacked out "ex-gay" organization has launched in Florida - allegedly to "help" people overcome homosexuality, but more likely to get in on the monetary gravy train and to continue to support the "choice myth" for political reasons - it's appropriate to look at the thoughts of one who survived bogus "ex-gay" cure treatments program and who now speaks out against such fraudulent and harmful programs. On his blog, Peterson Toscano doesn't mince words and looks at the real underlying basis of these pernicious snake oil "ministries." Here are some highlights:
*
Recently Lisa Ling misinformed the public through an episode of her new program on the Oprah Winfrey Network (OWN.) In regards to gay reparative therapy and ex-gay ministries, like many journalists before her, Lisa Ling asked the wrong question– Can You Pray Away the Gay? Instead she should have asked the more essential questions:
*
1.Why do people seek to change or repress their sexual orientation?
*
2.And at what cost? What potential harm comes to those who attempt to change or repress their sexual orientation?
*
Exodus International and Alan Chambers admit that genuine change from gay to straight does not happen. People simply change some of their behaviors and change their identities. They still have desires for people of the same-sex, and for most who claim they are ex-gay or former homosexuals, they cannot successfully partner with someone of the opposite sex. Also, according to Exodus, the VAST MAJORITY of people who enroll in these programs ultimately fail and come out gay. What happens to those people? Does Exodus know? Do they care?
*
As to the harms that have come to those who have attempted to de-gay myself, they are many and at times devastating. In the article, Ex-Gay Harm–Let Me Count the Ways, I outline nine different areas of harm I have identified after speaking with over 1,000 ex-gay survivors.
*
1.Psychological
2.Emotional
3.Spiritual
4.Relational
5.Financial
6.Vocational
7.Developmental
8.Physical
9.Sexual
*
In the article [Ex-Gay Harm--Let Me Count the Ways] I provide descriptions of each
*
Lisa Ling attempted to present a human interest story. Sure she presented some positive portrayals of gay folks, even gay Christian folks, but ultimately she ultimately she failed in her public responsibility as a journalist to highlight the risks to health and well-being the religious-based ex-gay programs pose.
*
Bottom line, Lisa Ling gave loads of airtime to providers and promoters of gay cures and no time at all to the victims of these programs.
Posted by Michael-in-Norfolk at Monday, March 14, 2011