The Increasingly Visible Insanity of the Far Right 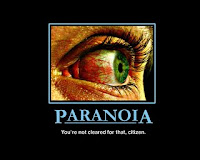 I guess the far right elements in this country have long been playing without a full deck as they say, but it seems that in the last few months since the 2008 elections the loonies have been truly outdoing themselves. Between the anti-gay Christianists, the conspiracy theory lovers and the simply paranoid, and the crowd of nutcases assembled at Conservative Political Action Conference ("CPAC") in Washington, D.C., it has become a bit scary that some of these folks are on the loose. Here's a sampling of some of the lunacy among the the GOP base (seriously, you could not make up some of this stuff if you tried):
*
First there is the unhinged lunacy among some Catholics in San Diego - perhaps not a surprising phenomenon given who we have as the current Pope - that is more than a bit troubling. Johnatan Turley reports as follows:
*
San Diego Catholics are protesting a decision by San Diego Bishop Robert Brom to ask Pastor Richard Perozich to tone it down after he ran a rabid article entitled “100 Days or End of Days?” in the parish bulletin of St. Mary’s Catholic Church in Escondido. Fr. Perozich appears to believe that Obama will be unleashing such things as “homogenital sex.” Fr. Perozich believes that with Obama “evil has acceded to power.” Fr. Perozich has previously written columns that caused controversy, such one, “The Wages of Sin is Death” which was a diatribe against homosexuality and tied directly to the payment of damages to victims of sexual abuse.
*
Equally insane is the Creation Studies Institute and its "Operation Salt" which seeks expose the "deception, brainwashing and censorship" of evolution. Frankly, if anyone knows about brainwashing, it's this organization which brainwashes the mentally feeble who accept its half baked theories. Here's an example:
*
90% of Dating Results Point to a Young Earth! It is the clear testimony of the Bible that “In the beginning God created the heavens and the earth,” Gen. 1:1. The only account of the origin of the universe and life on planet earth is the written record of the first book of the Bible. All else concerning the creation of the universe and all living organisms is clearly delineated in the Genesis account. The evidence we see all around us is confirmed in the biblical record. . . . the veracity of the Bible is constantly being tested and vindicated by the discoveries of true science and not the pseudo-science known today as the Theory of Evolution.
*
Then we have the loons at CPAC who still are obsessing over the false claims that that Barack Obama was not born in the USA - Hawaii doesn't count apparently - and is not eliligible to be president. Here's a sampling from Think Progress:
*
Earlier this afternoon, Cliff Kincaid, head of a conservative group Accuracy in Media, introduced Rep. Mike Pence (R-IN). Kincaid suggested that President Obama is a communist, then suggested Obama was not born in the United States — to which the crowd cheered wildly. . . . Despite the fact that it has been thoroughly and repeatedly debunked, radical conservatives continue to peddle the ridiculous myth.
*
Also at CPAC we have Matt Staver of Liberty Counsel and Dean of Liberty University School of Law - Jerry Falwell's parting booby prize to Virginia - expounding on what same-sex marriage would do to the family, namely produce a generation of violent criminals. Here's a summary from Right Wing Watch:
*
The Liberty Counsel's Mat Staver explains to the CPAC audience that "same-sex marriage sets forth a fatherless policy" and says that you don't need a bunch of scientific data to know that that is bad. After all, kids without fathers tend to fare poorly ... and if you need proof, all you have to do is take a look at the prison population. Thus, the logic seems to go, letting two women get married will lead to a whole generation of fatherless children who will inevitably become violent criminals:

Posted by Michael-in-Norfolk at Thursday, February 26, 2009