Pundits Give Jindal a Beating 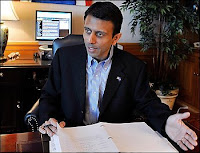 I did a post earlier today concerning Louisiana Governor Bobby Jindal and his response to Barack Obama. While I slammed Jindal for his Christianist extremist views, apparently many conservatives were likewise less than thrilled by Jindal's performance and many thought his views reflected poorly om the GOP. Here is David Brooks' reaction:
*
DAVID BROOKS: You know, I think Bobby Jindal is a very promising politician, and I oppose the stimulus because I thought it was poorly drafted. But to come up at this moment in history with a stale "government is the problem," "we can't trust the federal government" - it's just a disaster for the Republican Party. The country is in a panic right now. . . . In a moment when only the federal government is actually big enough to do stuff, to just ignore all that and just say "government is the problem, corruption, earmarks, wasteful spending," it's just a form of nihilism. It's just not where the country is, it's not where the future of the country is. . . . Some people say they [the GOP] got too weird or too conservative. He [Jindal] thinks they got too moderate, and so he's making that case. I think it's insane, and I just think it's a disaster for the party. I just think it's unfortunate right now.
*
And Politico has these quotes from the Fox News panelists:
*
BRIT HUME: “The speech read a lot better than it sounded. This was not Bobby Jindal’s greatest oratorical moment.”
*
NINA EASTON: “The delivery was not exactly terrific.”
*
CHARLES KRAUTHAMMER: “Jindal didn’t have a chance. He follows Obama, who in making speeches, is in a league of his own. He’s in a Reagan-esque league. … [Jindal] tried the best he could.”
*
JUAN WILLIAMS: “It came off as amateurish, and even the tempo in which he spoke was sing-songy. He was telling stories that seemed very simplistic and almost childish.”
*
As I have said before, until the GOP rids itself of the Christian Right - and that includes the creationism and exorcism believing Jindal - and once again embraces education, intelligence and reason, it will be an uphill battle for the GOP to regain the support of moderates and those who are not Bible beating know nothings at the national level.
Posted by Michael-in-Norfolk at Wednesday, February 25, 2009