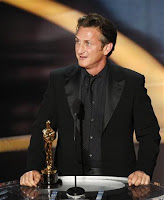 I was happy to see Sean Penn win the best actor award for his portrayal of Harvey Milk in the Movie milk. Hopefully, between his win and that of Dustin Lance Black some people who might not otherwise see the film will reconsider and see it. Better yet, if they do see the movie, perhaps it will make some of them rethink their attitudes towards LGBT Americans. I am also very grateful for Penn's remarks concerning gay rights as he accepted his Oscar. Interestingly, the Times of India gave more coverage to the anti-gay protesters mentioned by Penn than the LA Times:
*
"I think that it is a good time for those who voted for the ban against gay marriage to sit and reflect and anticipate their great shame and the shame in their grandchildren's eyes if they continue that way of support," Penn said as he accepted his golden statuette. "We've got to have equal rights for everyone." He dismissed a protest outside the glittering Hollywood ceremony by banner-waving opponents of gay marriage, which four months ago was overturned in California following a referendum. The demonstraters were "very sad in a way, because it's a demonstration of such emotional cowardice to be so afraid to be extending the same rights to a fellow man as you would want for yourself," Penn said after the ceremony.
*
I do agree with Penn that someday the anti-gay elements in U.S. society will be viewed with the same disdain as the rabid segregationists of an earlier era. I sincerely hope that that day comes sooner as opposed to later. My congratulations to Sean Penn.
Posted by Michael-in-Norfolk at Monday, February 23, 2009