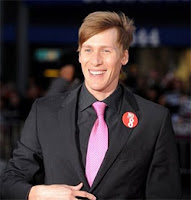 I was extremely happy to see Dustin Lance Black, a young gay Mormon, win the Oscar for best original screenplay. His acceptance speech was very moving as well. While some have criticized the movie Milk, regardless of how it might have been done differently, I believe that the movie carried a much needed message to a younger generation that is often oblivious to events of the past. It is also a reminder to the rest of us of the efforts of others in the struggle for gay rights. Obviously, the movie would not have been possible but for the screen play written by Dustin Lance Black, and I believe he did a masterful job. Having seen Milk at a private screening in Washington, D.C., last December and had the opportunity to hear Dustin, Cleve Jones and Bruce Cohen speak about the film, his win was even more poignant. Here are the notes from his speech:
*
"Oh my God, this was not an easy film to make. I have to thank all the real life people who shared their stories with me... When I was 13 years old my beautiful mother and father moved me from a conservative Mormon home in San Antonio, Texas to California and I heard the story of Harvey Miller. And it gave me hope, hope to live my life, gave me the hope to live my life openly as who I am. And maybe even I can fall in love and get married. I want to thank my Mom who always loved me for who I am even when there was pressure not to. If Harvey had been alive today, I think he'd want me to say to all the gay and lesbian kids out there that have been told that they are less than by their churches, their government or their families that they are beautiful, wonderful creatures of value and no matter what anyone tells you, God does love you and that very soon I promise you, you will have equal rights, federally, across this great nation of ours."
*
Congratulations Dustin!!
Posted by Michael-in-Norfolk at Sunday, February 22, 2009

Did you hear in Sean Penn's acceptance speech his reference to protesters outisde the Kodak Theater.

I wonder if that will make it on the National mainstream news.

I'll have to check the websites of LA and SF TV stations Monday to see if they show any footage.

And yes, Dustin's speech as was very moving as was Penn's.

I loved his dig to the conservatives not once but twice ... "commie homo lovers" (lol).

And frankly I don't know what the big deal is with Slumdog.

You mean to tell me that film was better than other films put out this year ?

If Slumdog hadn't been picked up by Murdoch's Fox Searchlight arm of 20th Century Fox it probably would have been in the foreign film category.

That's where it belonged as far as I'm concerned.