Why Virginia Must Elect a Democrat Governor 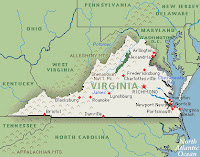 The Washington Blade has a lengthy article that looks at the race for governor of Virginia this year. Among the three contenders for the Democrat nomination, it's not clear that there is any front runner to date. My fear is that in the process of seeking the nomination, the three contenders - Terry McAuliffe, Brian Moran, and Creigh Deeds - may damage one another and allow the nightmare scenario of Bob "Taliban Bob" McDonnell being elected. Among the three Democrats, Deeds carries the baggage of having supported Virginia's draconian "Marriage Amendment" that made LGBT Virginians third class citizens. Moran has the most pro-gay voting record in the Virginia General Assembly of the three Democrats. Nonetheless, any of the three would be preferable to McDonnell who shares the anti-gay views of Pat Robertson (who likely will give McDonnell a nice big contribution) and James Dobson. Dobson's Virginia affiliate, The Family Foundation, more or less controls the Republican Party of Virginia. Here are some story highlights on the Democrat contenders:
*
As candidates seeking to become the next governor of Virginia vie for the gay vote, the race’s Democratic contenders met for the first time with a gay group to answer questions and hear concerns before the primary.The three candidates seeking the Democratic nomination reached out Feb. 21 to the Virginia Partisans, a statewide gay Democratic group, during the organization’s board retreat in Arlington.
*
Charley Conrad, president of the Virginia Partisans, said in a statement Monday that the meeting was historic for gay Virginians.“There was a time not very long ago in Virginia when no politician wanted to even say the word ‘gay,’” he said, “and now we have all three Democratic candidates for the top elected office coming to us for an endorsement.”Conrad said Virginia Partisans would endorse a candidate in April. The Democratic primary is set for June 9.
*
Moran never voted contrary to how Equality Virginia, a statewide gay activist group, asked lawmakers to vote on legislation in the General Assembly. Pro-gay legislation that he’s supported includes a hospital-visitation rights bill in 2007 and legislation in 2008 that set up the medical registry. Moran voted in 2005 against legislation that would have prohibited adoption by gays.When the Marshall-Newman Amendment came to the House floor in 2005 and 2006, Moran was one of three delegates to speak out against it. The measure, which made a prohibition on same-sex marriage and civil unions part of the state constitution, became law in 2006. In addition to voting against the amendment twice, Moran campaigned against the amendment by fundraising for the Commonwealth Coalition and attending “Vote No” events.
*
All the Democratic candidates committed to renewing the executive order barring job discrimination based on sexual orientation in the state workforce. Former Gov. Mark Warner initially issued the order during his tenure as governor and Gov. Tim Kaine renewed it.But the candidates were reluctant to pledge to expand the order to include explicit protections for gender identity.
*
What is not clear is what the Democratic candidates would do to better protect gay Virginians since the Virginia Attorney General's office is currently challenging the power of the governor to grant protections by way of Executive Order. As for Bob McDonnell, the story states in part as follows:
*
McDonnell has a history of taking anti-gay actions as a public official — starting in 2006 as attorney general and before that as a lawmaker in the Virginia House. In 2006, McDonnell issued an opinion that concluded Kaine’s executive order prohibiting discrimination against gays in the state workforce was unconstitutional.
*
McDonnell voted in favor of the bill that would have prohibited adoption by gay Virginians. In 2004 and 2005, he voted against bills that would have allowed insurance companies to provide coverage to the partners of their gay customers. And in 2005, McDonnell voted in favor of the Marshall-Newman Amendment. His campaign also donated $1,000 in support of the effort to pass the Marshall-Newman Amendment.
*
McDonnell as attorney general issued an opinion stating that the Marshall-Newman Amendment wouldn’t interfere with contracts, wills, medical directives and other agreements, and that it wouldn’t modify the “enforcement of Virginia’s domestic violence laws.”The opinion enabled municipalities in Northern Virginia to issue directives requiring officials to treat domestic violence calls for gay couples the same way they’d treat such calls for straight couples.
*
Candidly, McDonnell's opinion on the Marriage Amendment was issued in an effort to avoid a challenge to the Amendment under the federal constitution and should not be taken as a gay friendly step on McDonnell's part.
Posted by Michael-in-Norfolk at Friday, February 27, 2009