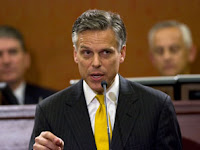 Politico has a wide ranging interview with Utah Governor John Huntsman online and it is an interesting read in a number of ways. First, Huntsman has some less than kind words for Congressional Republicans and he seems to realize that more of the same narrow minded, theocratic and divisive rhetoric from the GOP will not win back moderates or minorities who recognize that they are increasingly unwelcome by the Kool-Aid drinking party base. Secondly, he has done a major about face on gay rights and has advocated for the passage of many of the Common Ground initiative legislative package. In fact, in the interview, he sounds like he even understands that re-packaging the GOP message is not enough. The message needs to be changed significantly, not just re-wrapped. Here are some highlights:
*
Utah Gov. Jon Huntsman may be the fastest-rising Republican star you have never heard of. . . . POLITICO met with Huntsman at the winter meeting of the National Governors Association, where he discussed the process of economic recovery and stressed the need for his party to catch up with the younger generation on issues ranging from the environment and gay rights. Here are some excerpts of the conversation.
*
Q: Are you saying that congressional Republicans are irrelevant? A: Well, I’m saying, to a lot of states like ours, there isn’t much guidance coming out of Congress that necessarily impacts anything we do. But I’ll tell you this about the overall debate: we will be irrelevant as a party until we become the party of solutions and until we become the party of preeminence.
*
Q: You’ve changed your position on gay rights. What prompted that? A: Well, I’ve always been in favor of greater equality. My first year in office I ran a…reciprocal beneficiary rights piece of legislation. It failed, but my first year in office I wanted to see if we could do more in the name of individual rights. And I’ve always thought that we were a little bit behind in terms of equality for people born under the same constitution.
*
Q: In December you talked about people 40 and under having a very different view on the environment. Is there a similar generational gap on gay rights? A: You hit on the two issues that I think carry more of a generational component than anything else. And I would liken it a bit to the transformation of the Tory Party in the UK…They went two or three election cycles without recognizing the issues that the younger citizens in the UK really felt strongly about. They were a very narrow party of angry people. And they started branching out through, maybe, taking a second look at the issues of the day, much like we’re going to have to do for the Republican Party, to reconnect with the youth, to reconnect with people of color, to reconnect with different geographies that we have lost.
*
Q: It sounds like what you’re saying is that Republicans need to win the educated class of America. A: Absolutely. The country, I do believe, is a centrist-right country, for the most part, when you look closely at the demographics…I’m not sure that we have connected fully, meaningfully and in any complete way on the issues of the day. . . . I think whoever emerges as the standard-bearer for the Republican cause in four or eight years will have to first prove that they can be a person who delivers results in the incubator or laboratory of democracy, as opposed to someone engaging in gratuitous rhetoric.
*
Of course for the GOP to regain the educated elements of society, it will be a prerequisite that the GOP not be controlled by the flat earth, Kool-Aid drinking elements of the Christian Right. I do not know if Huntsman or anyone else in the GOP has the nerve and ability to stop the party's growing embrace of the ignorant, selfish and intolerant.
Posted by Michael-in-Norfolk at Tuesday, February 24, 2009