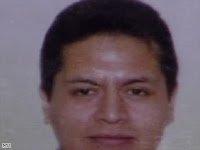 The forces of intolerance that were further riled by Sarah Palin's run for VP and her mantra about who was and was not a "real American" took another life in Brooklyn, New York, where native Ecuadorian Jose Sucuzhanay died Friday, five days after he was hit in the head with a bottle and beaten with a baseball bat. Anti-gay and racial slurs were heard as Sucuzhanay was attacked and beaten while walking home from a church party. His family and others are not going quietly and hopefully those who murdered an innocent man will be brought to justice. Travesties like this will continue to occur as long as certain elements in U.S. society found largely among the GOP base believe that they get to be the arbiters of who is and is not an American based on their skin color, sexual orientation or country of birth. Here are some highlights from CNN:
*
Mourning relatives say they hope a slain Latino immigrant can become a symbol against hate crimes. New York City police are still hunting for suspects in the killing of Ecuadorian Jose Sucuzhanay, who died Friday, five days after he was hit in the head with a bottle and beaten with a baseball bat.
*
Hundreds of people marched Sunday through the Brooklyn neighborhood where Sucuzhanay was attacked, carrying signs saying "no more hate crimes." . . . Family spokesman Francisco Moya said Jose Sucuzhanay, 31, had lived in the United States for more than a decade and was a legal resident.
*
Diego Sucuzhanay said Jose set up a successful real estate business in a low-income area, thinking he could make a difference there. He said his brother wanted to help everyone and hired a diverse team, including four African-Americans and two Latinos. He was raising two children: a 9-year-old son and a 4-year-old daughter.
*
Police said Jose Sucuzhanay and his brother Romel had left a party at a church when several men approached them in a car in Brooklyn's Bushwick section, about a block from the brothers' home, on December 7. The men shouted anti-gay and anti-Latino vulgarities and attacked the brothers, police said.
Posted by Michael-in-Norfolk at Monday, December 15, 2008