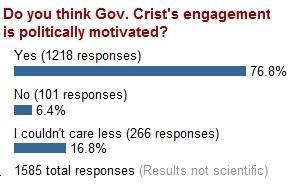 Based on all the past rumors and statements by those who have seen Charlie Crist in gay bars, etc., this announcement looks politically motivated to me (those taking a Sun-Sentinnel poll thought likewise). I mean, the guy's been unmarried fro three decades after a less than one year marriage and now he suddenly is in love and getting married? I hope Carole Rome knows what she is getting into. But then, being Florida's first lady and with a hope of being the Vice President's wife, maybe she is getting what she wants. While Crist probably believes that getting married will end some of the gay rumors and enhance his prospects to be picked as McCain's running mate, Ms. Rome is not exactly a Christianist's dream pick: she's Jewish and is divorced and - Heaven forbid - owns a Halloween costume manufacturing company. The fact that she has two daughters will give Crist an insant family for photo ops. Crist will definitely need to make sure to distance himself from young male campaign aids. Here are some highlights from St. Petersburg Times:
*
Gov. Charlie Crist, single for nearly three decades, on Thursday morning became engaged to his girlfriend of nine months, Carole Rome. . . . No date has been set for the wedding, but Crist, 51, said it would be in St. Petersburg, where he is a member of First United Methodist Church. There probably also will be a reception in Tallahassee.
*
Rome is a 1991 honors graduate of Georgetown University who became president of her family's 100-year-old Halloween costume business in 2000 when her father died. She has two daughters, ages 11 and 9, with former husband Todd Rome of New York, CEO of Blue Star Jets. She moved to Fisher Island in Miami in 2006.
*
And his engagement is likely to reverberate well beyond Florida because the popular governor is widely viewed as a contender to be likely Republican presidential candidate John McCain's running mate. Not since Franklin Pierce picked William King to be his running mate in 1852 has America had a bachelor vice president.
Posted by Michael-in-Norfolk at Friday, July 04, 2008