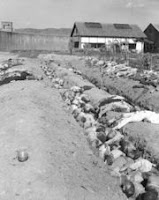 John McCain, most in the GOP and of course the Christianists constantly screech that anyone who questions the USA's actions and/or questions military command decisions is unpatriotic, if not an outright traitor. This "America Right or Wrong" mentality nad the crazy belief that God is always on the USA's side has allowed so many horrors to occur over the years. Yet, time and time again individuals and commanders make the same sort of wrong-headed mistakes. We will probably never know for sure the total lives that have been lost for instance as a result of the Chimperator's delusional launch of the Iraq War. Based on this story from RawStory, would that there had been more unpatriotic individuals on the scene back in the 1950's. In my view, a true patriot does question the decision makers so as to try to keep the country form misdeeds and keep the democratic process alive. In this instance in Korea, one can only wonder as to how many innocent people died. Here are some story highlights:
*
SEOUL The American colonel, troubled by what he was hearing, tried to stall at first. But the declassified record shows he finally told his South Korean counterpart it "would be permitted" to machine-gun 3,500 political prisoners, to keep them from joining approaching enemy forces. In the early days of the Korean War, other American officers observed, photographed and confidentially reported on such wholesale executions by their South Korean ally, a secretive slaughter believed to have killed 100,000 or more leftists and supposed sympathizers, usually without charge or trial, in a few weeks in mid-1950.
*
Extensive archival research by The Associated Press has found no indication Far East commander Gen. Douglas MacArthur took action to stem the summary mass killing, knowledge of which reached top levels of the Pentagon and State Department in Washington, where it was classified "secret" and filed away.
*
The most important thing is that they [US personnel] did not stop the executions," historian Jung Byung-joon, a member of the 2-year-old commission, said of the Americans. "They were at the crime scene, and took pictures and wrote reports." They took pictures in July 1950 at the slaughter of dozens of men at one huge killing field outside the central city of Daejeon. Between 3,000 and 7,000 South Koreans are believed to have been shot there by their own military and police, and dumped into mass graves, said Kim Dong-choon, the commission member overseeing the investigation of these government killings.
*
It was the British who took action, according to news reports at the time. On Dec. 7, in occupied North Korea, British officers saved 21 civilians lined up to be shot, by threatening to shoot the South Korean officer responsible. Later that month, British troops seized "Execution Hill," outside Seoul, to block further mass killings there.
*
An American historian of the Korean War, the University of Chicago's Bruce Cumings, sees a share of U.S. guilt in what happened in 1950. "After the fact, with thousands murdered, the U.S. not only did nothing, but covered up the Daejeon massacres," he said.
Posted by Michael-in-Norfolk at Saturday, July 05, 2008