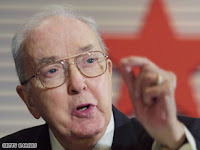 I know it is not nice to speak ill of the dead, but Jesse Helms, former U. S. Senator from North Carolina, was in many ways NOT a nice man. Among other things he was a racist and a homophobe who did all he could to subvert gay rights and reduce funding for HIV/AIDS. He clearly was of a Christianist mindset and cared nothing for the religious freedom rights of those who held counter religious views. As is all too typical, many of the stories now running on Helms ignore the ugly underbelly of what Helms was all really about - and what conservatism in its current form is all about as well. America Blog has a good post that reminds us of what the true Jesse Helms was all about. It is not a nice picture. Here are highlights:
*
Can't even begin to think of anything nice to say about this guy -- but a lot of other people will start praising Helms as if none of the hateful stuff matters. The hateful stuff matters. Let's reminisce on the life of one of America's biggest bigots who ruined the lives of so many.
*
Jesse Helms on "negroes": As an aide to the 1950 Senate campaign of North Carolina Republican candidate Willis Smith, Helms reportedly helped create attack ads against Smith's opponent, including one which read: "White people, wake up before it is too late. Do you want Negroes working beside you, your wife and your daughters, in your mills and factories? Frank Graham favors mingling of the races." Another ad featured photographs Helms himself had doctored to illustrate the allegation that Graham's wife had danced with a black man. (The News and Observer, 8/26/01; The New Republic, 6/19/95; The Observer, 5/5/96; Hard Right: The Rise of Jesse Helms, by Ernest B. Furgurson, Norton, 1986)
*
The University of North Carolina was "the University of Negroes and Communists." (Capital Times, 11/22/94) Black civil rights activists were "Communists and sex perverts." (Copley News Service, 8/23/01)
*
Of civil rights protests Helms wrote, "The Negro cannot count forever on the kind of restraint that's thus far left him free to clog the streets, disrupt traffic, and interfere with other men's rights." (WRAL-TV commentary, 1963) He also wrote, "Crime rates and irresponsibility among Negroes are a fact of life which must be faced." (New York Times, 2/8/81)
*
Helms on "degenerate, weak, sick homosexuals": Over the years Helms has declared homosexuality "degenerate," and homosexuals "weak, morally sick wretches." (Newsweek, 12/5/94) In a tirade highlighting his routine opposition to AIDS research funding, Helms lashed out at the Kennedy-Hatch AIDS bill in 1988: "There is not one single case of AIDS in this country that cannot be traced in origin to sodomy." (States News Service, 5/17/88)
*
Helms being a racist: And the man ABC News now describes as a "conservative icon" (8/22/01) in 1993 sang "Dixie" in an elevator to Carol Moseley-Braun, the first African-American woman elected to the Senate, bragging, "I'm going to make her cry. I'm going to sing Dixie until she cries." (Chicago Sun-Times, 8/5/93)
*
On cutting AIDS funding: Sen. Jesse Helms says the government should spend less money on people with AIDS because they got sick as a result of "deliberate, disgusting, revolting conduct," The New York Times reported Wednesday...."We've got to have some common sense about a disease transmitted by people deliberately engaging in unnatural acts," Helms told the Times.
Posted by Michael-in-Norfolk at Friday, July 04, 2008