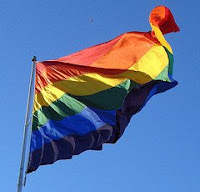 I have a number of Indian clients, the vast majority of which are Hindu and strike me as fairly religious, yet very respectful of the religious beliefs of others - in sharp contract to the wingnut Christianists plaguing the country. Would that the fundies would learn some tolerance from Hidus and others that the Christianists look down upon. Some I believe know that I am gay and really seem to have no issue with it whatsoever. They trust my abilities as an attorney and that is why they use my services. I even have one Indian client who is gay, although homosexuality is not something looked upon favorably and one sees very few Indians out at the gay clubs. Thus, I found Newsweek's article on India and Gay Pride interesting given my interation with so many clients from India or of Indian descent. One can hope that in time India and its people will come to recognize that gays were made the way we are by the creator no matter what name he/she is given. As such, we are deserving of respect and equality. Here are some story highlights:
*
India may pride itself on being the world's largest democracy, but it still takes a dim view of gay rights. Homosexuality is illegal and deemed an "unnatural sexual offense" under section 377 of the country's penal code, where it is categorized alongside bestiality and punishable by up to 10 years in prison.
*
So it was with a mixture of defiance and celebration that several hundred participants in New Delhi's first gay pride parade rallied through the capital on Sunday, beating drums, shouting slogans and waving rainbow-striped pride flags. Simultaneous marches were held in Calcutta and Bangalore, along with dozens of other cities the world over.
*
Lesley Esteves, a New Delhi magazine editor who helped organize the parade, dubbed it a "community event" and explained the challenges of pushing the bounds of social acceptability in India: "India functions like this—you have this massive media coverage and people know what the word 'queer' is." But at the same time, "We are still having to go to the courts to convince families against holding their children captiv[e] in their homes because they are homosexuals."
*
Indian newspapers are rife with tales of suicides of homosexual men and women pressured into traditional, arranged marriages. And those with the means to leave the country sometimes do so, seeking asylum in more sympathetic climes. . . . This 150-year-old chapter of Indian history may be coming to a close soon. The Delhi High Court is weighing a petition against Article 377, and a ruling is expected in the near future. Brought by the Naz Foundation, an Indian organization that works to prevent the spread of HIV/AIDS, the petition is currently pending on appeal and the next hearing is July 2. Perhaps next year, marchers will feel more at ease showing their faces.
Posted by Michael-in-Norfolk at Thursday, July 03, 2008