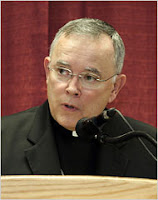 UPDATE- Here's what the Denver Post's story says about one of the predator priests:
*
An attorney for 14 of the victims, Jeff Anderson of St. Paul, Minn., said White abused 12 of his clients. White was a serial offender who could not control himself, Anderson said, and the archdiocese officials who could have stopped him by reporting allegations to the police lacked the courage to do so for decades. "They covered up and enabled him to be what he was," said Tom Koldeway, now 47, one of three Koldeway siblings abused by White in Minturn. "He had accusations against him before I was even born. They knew."
*
Once again a Catholic Church Diocese is paying out significant amounts to settle lawsuits arising from the Church's practice of looking the other way and shuffling sexual predators from parish to parish where they could prey on other unsuspecting minors. As long as nothing happened that negatively impacted the collection plate revenues, apparently it mattered nothing to the prissy, self-righteous members of the Church hierarchy that children were being molested. As long as the Church protected its public image, the shattered lives of children meant nothing. Also, if the Church was truly sorry for the abuse suffered by the victims, one would think that it would not have made the victims go through three years of protracted litigation. Actions speak louder than disingenuous words of apology. Here are some highlights from the New York Times:
*
DENVER — After nearly three years of litigation, the Archdiocese of Denver said Tuesday that it would pay $5.5 million to settle more than a dozen lawsuits over sexual abuse by priests. The 16 lawsuits and two additional claims against the archdiocese were filed by people who said that as children, they were abused by priests from 1954 to 1981 and that the archdiocese concealed the crimes.
*
The settlements bring to 42 the number of abuse claims the archdiocese has settled since 2005 against two priests, the Rev. Harold Robert White and the Rev. Leonard Abercrombie. A third priest, the Rev. Lawrence St. Peter, was accused in a 43rd case that was also settled. The amount of all the settlements totals more than $8.2 million. Two more abuse lawsuits against the archdiocese have yet to be resolved.
*
“It is my hope that these settlements help the victims and their families to heal,” Archbishop Charles J. Chaput said. “I’ve expressed an apology on behalf of myself, our clergy and the whole Catholic community, and I apologize to them again today.”
*
The national director of the group Survivors Network of Those Abused by Priests, David Clohessy, cautioned that sexual abuse settlements did not represent “any fundamental challenge to the church’s longstanding patterns of recklessness and secrecy that got us into this mess to begin with.” Such settlements, he noted, enabled church officials to avoid testifying in open court. Still, Mr. Clohessy said, “any validation that horrific crimes happened, were concealed and could have been prevented can be very, very healing.”
Posted by Michael-in-Norfolk at Wednesday, July 02, 2008