Will Someone Get a Wooden Stake and Some Silver bullets? 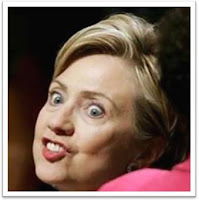 It surely would be nice if the uncommitted superdelegates in the Democratic Party would grow some balls and endorse Obama and end the travesty of Hillary Clinton, a/k/a, Akasha, Queen of the Damned, doing her damnedest to destroy the Democratic Party by wasting huge amounts of money, damaging Obama, and causing a civil war. Maybe my reader who suggested that perhaps she's secretly on the GOP payroll is right. I'd be lying if I said that my loathing for the woman isn't growing by the day (make that the minute). If Hillary will not grasp the reality that she has LOST, can't someone please get a wooden stake to drive through her heart while someone else unloads a round of silver bullets? Hillary is like the spoiled child who would rather destroy something rather than have anyone else have it. WTF is wrong with the superdelegates that they cannot see that Hillary's irrational obsession shows that she'd be Chimperator II if she were to gain the White House. Of course she won't - she will let John McCain have it so she can run again in 2012. Here's what Rachel Maddow had to say about Akasha:
*
Tonight, Hillary Clinton signaled that as long as superdelegates stand on the sidelines, she isn't getting out of the race, and as long as she's in the race, she'll do whatever it takes to win, even if that means undermining Barack Obama's legitimacy.
*
So the time has come to push her out the race, and the only people who can do it are the undeclared superdelegates. They are the ones responsible for this mess, and they are the ones who must end it.
*
Andrew Sullivan seems to share my sentiments on Hillary's dangerous, power obsessed madness that clearly makes her unfit to be vice president much less president:
*
How do you respond to a sociopath like this? She agreed that Michigan and Florida should be punished for moving up their primaries. Obama took his name off the ballot in deference to their agreement and the rules of the party. That he should now be punished for playing by the rules and she should be rewarded for skirting them is unconscionable.
*
I think she has now made it very important that Obama not ask her to be the veep. The way she is losing is so ugly, so feckless, so riddled with narcissism and pathology that this kind of person should never be a heartbeat away from the presidency.
Posted by Michael-in-Norfolk at Wednesday, May 21, 2008

Are you sure you're not writing on my blog ???