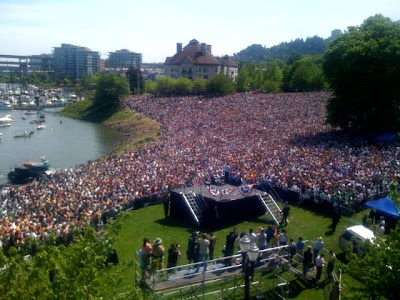 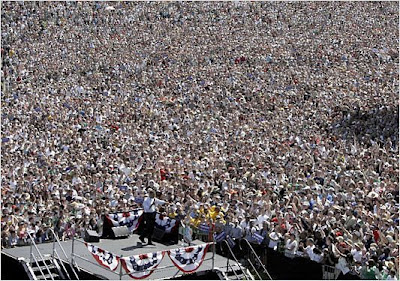 After Barack Obama's incredible rally in Portland, Oregon, with in excess of 70,000 people in attendance, it is indicative that Warren Buffett can see the reality that escapes Hillary Clinton, a/k/a Akasha, Queen of the Damned. Namely that Hillary has LOST and needs to give it up the race NOW. In my opinion, Hillary's inability to accept reality indicates that electing her to the presidency would be saddling the nation with another president who is out of touch with the real world - definitely something we as a country do not need after 8 years of the Chimperator and his delusional mindset. Of course, I had one reader suggest that maybe the GOP has promised to retire Hillary's campaign debt if she stays in the race as long as possible to damage Obama in any way she can. Here are highlights from CNN on Buffett's endorsement:
*
(CNN) — Warren Buffett, a longtime friend of both Hillary and Bill Clinton, told CNN Monday Barack Obama would be his choice for the next President of the United States. Speaking with CNN's Becky Anderson, the billionaire investor said he would gladly vote for either candidate, but said it is clear the senator from Illinois will be the party's nominee. "So it would be Barack Obama, — [he] would be my preference," Buffett said. Buffett, the world's richest man according to Forbes Magazine, runs Omaha-based Berkshire Hathaway Inc. The company's assets total more than $260 billion.
Posted by Michael-in-Norfolk at Monday, May 19, 2008