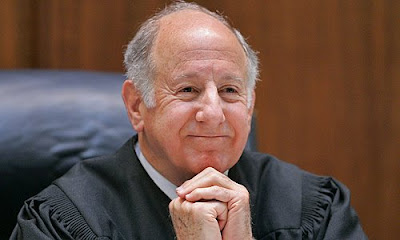 Ronald M. George, a moderate Republican who voted with the majority, likens the case to civil rights battles.

Today’s Los Angeles Times has a story that focuses on a discussion with California Supreme Court Chief Justice, Ronald M. George, the Court’s historic ruling released on Thursday that struck down all California laws banning gay marriage. In addition, the Court’s ruling also had the effect of adding sexual orientation to the list of protected categories such as race, religion, national origin and gender. I recommend reading the full story. It is noteworthy that while many blacks have said that the struggle for gay rights is not akin to the civil rights struggle of blacks, George’s travels across the Jim Crow South may have had a hand in moving him to support the majority’s ruling, something that was not expected even among the wingnuts. Would that more judges and leaders in government, churches (e.g., the ELCA), and institutions would have the courage to recognize that "there are times when doing the right thing means not playing it safe." Doing what is popular and/or easy, does not make it necessarily the right thing to do. Here are some story highlights:
*
SAN FRANCISCO -- In the days leading up to the California Supreme Court's historic same-sex marriage ruling Thursday, the decision "weighed most heavily" on Chief Justice Ronald M. George -- more so, he said, than any previous case in his nearly 17 years on the court. But as he read the legal arguments, the 68-year-old moderate Republican was drawn by memory to a long ago trip he made with his European immigrant parents through the American South. There, the signs warning "No Negro" or "No colored" left "quite an indelible impression on me," he recalled in a wide-ranging interview Friday. "I think," he concluded, "there are times when doing the right thing means not playing it safe."
*
Once he took up the constitutional challenge, he said he did not permit any consideration of political fallout. "I am very fatalistic about these things," he said. "If you worry, always looking over your shoulders, then maybe it's time to hang up your robe." Asked whether he thought most Californians would accept the marriage ruling, George said flatly: "I really don't know." He indicated he saw the fight for same-sex marriage as a civil rights case akin to the legal battle that ended laws banning interracial marriage. He noted that the California Supreme Court moved ahead of public sentiment 60 years ago when it became the first in the country to strike down the anti-miscegenation laws.
*
California's decision, in a case called Perez vs. Sharp, preceded the U.S. Supreme Court's action on the issue by 19 years. Even after that ruling, Californians passed an initiative that would permit racial discrimination in housing. The state high court again responded by overturning the law, George said. Rather than ignoring voters, "what you are doing is applying the Constitution, the ultimate expression of the people's will," George said.
*
"When is it that a court should act?" George mused. "When is it that a court is shirking its responsibility by not acting, and when is a court overreaching? That's a real conundrum. I have respect for people coming out on different sides of this issue." George's reputation for caution is based on the court's tendency, under him, to decide cases narrowly, refusing to reach issues not necessary to the case at hand. Advocates thrust the central constitutional question of equality for gay people on the court; there was no way to avoid it.
Posted by Michael-in-Norfolk at Sunday, May 18, 2008