On the Humorous Side 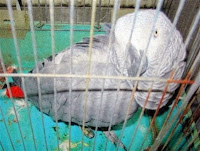 Growing up my family had a parrot for many years and the bird was definitely a character and often quite bold. The sound of the vacuum cleaner in particular sent him into spasams of shrieking and making a loud racket. When my family moved to Virginia from central New York, I got to drive the car carrying the parrot in the front passenger seat. In any event, I found this story from Japan humorous since it highlights what characters these birds can be. Here are highlights from Yahoo News:
*
TOKYO - When Yosuke the parrot flew out of his cage and got lost, he did exactly what he had been taught — recite his name and address to a stranger willing to help. Police rescued the African grey parrot two weeks ago from a neighbor's roof in the city of Nagareyama, near Tokyo. After spending a night at the station, he was transferred to a nearby veterinary hospital while police searched for clues, local policeman Shinjiro Uemura said. He kept mum with the cops, but began chatting after a few days with the vet.
*
"I'm Mr. Yosuke Nakamura," the bird told the veterinarian, according to Uemura. The parrot also provided his full home address, down to the street number, and even entertained the hospital staff by singing songs. The Nakamura family told police they had been teaching the bird its name and address for about two years.
Posted by Michael-in-Norfolk at Wednesday, May 21, 2008